Update: After we reached out to a Google representative, the company gave us the following statement:

We’ve been working closely with the European Commission and consumer protection agencies for the last few months to make improvements to Google Play that will be good for our users and provide better protections for children.

The representative was unable to comment on potential changes for the Play Store in the US or other non-European locations.

Consumer unrest over the prevalence of in-app purchases in free-to-play games has grown as of late, and nowhere is it more apparent than in Europe. The European Commission, the EU's legislative arm, has issued instructions to both Google and Apple to more accurately market the erstwhile "free" games. They've also instructed both companies not to encourage children to buy virtual items with real money after considerable complaints from consumers. Today the Commission reported on its progress, including a favorable response from Google. 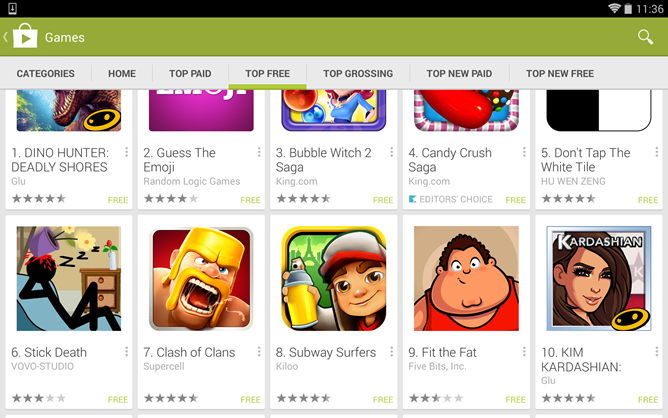 In a surprising move, Google has committed to stop referring to games with in-app purchases as free. That's a hard rule, with very little room for interpretation. From the European Commission's press release (emphasis ours):

These [changes] include not using the word "free" at all when games contain in-app purchases, developing targeted guidelines for its app developers to prevent direct exhortation to children as defined under EU law and time-framed measures to help monitor apparent breaches of EU consumer laws.

This doesn't mean that the thousands of free-to-play games with IAP in the Play Store will be re-labeled, just that Google will stop referring to them as such. That means no more IAP games in the various "free" promotions that show up on the Play Store home page, and presumably, Google will no longer allow free games with IAP in the "Top Free" list either. (Incidentally, 8 out of 10 of the games at the top of the "Top Free" Play Store list on my phone use in-app purchases.) Game developers and publishers will probably still be able to describe their IAP games as "free," unless Google changes its Play Store policies. But given the EU's recent crackdown, developers may decide to re-align their marketing as well.

Other changes to Google's policies will involve always-on password checks for purchases as a default setting, and developer guidelines that instruct game devs never to pressure children to buy virtual items with real money (or ask their parents to). Google has committed to making these changes by the end of September.

Now for the big question: will Google implement similar changes in the United States version of the Play Store or elsewhere? So far the US hasn't had the same vitriolic blowback against the free-to-play model, outside of some vocal dedicated gamers (including yours truly) and a few parents. Google's response to the Commission is presumably only applicable to the Play Store as it appears in EU nations. Frankly, there's a lot of money to be made with free-to-play games (sometimes a depressingly huge amount), and Google gets a cut of each transaction. It wouldn't be out of the question for Google to keep the status quo until the laws of each country or territory force them to do otherwise.

We've reached out to a Google representative from the United States for comment on this story, and we'll update if we receive a response.

Following a large number of complaints in EU countries concerning in-app purchases in online games and in particular inadvertent purchases by children, national authorities joined forces with the European Commission to find solutions.

The coordinated enforcement action in the EU on in-app purchases in online and mobile games has made real progress in delivering tangible results. Industry has made a number of engagements which seek to address consumer concerns. The action will increase consumer confidence in the fast-growing "app" sector.

"This is the very first enforcement action of its kind in which the European Commission and national authorities joined forces. I am happy to see that it is delivering tangible results. This is significant for consumers. In particular, children must be better protected when playing online. The action also provides invaluable experience for the ongoing reflection on how to most effectively organise the enforcement of consumer rights in the Union. It has demonstrated that cooperation pays off and helps to improve the protection of consumers in all Member States," said EU Commissioner for Consumer Policy Neven Mimica.

Vice President Neelie Kroes, responsible for the Digital Agenda, added: "The Commission is very supportive of innovation in the app sector. In-app purchases are a legitimate business model, but it's essential for app-makers to understand and respect EU law while they develop these new business models".

A common position agreed by national authorities within the CPC network and communicated to Apple, Google and the Interactive Software Federation of Europe in December 2013(1) asked that:

Making use of the consumer protection cooperation mechanism provided by EU rules, Apple, Google and relevant trade associations were asked to provide concrete solutions across the EU to the concerns raised.

Google has decided on a number of changes. Implementation is underway and will be completed by the end of September 2014. These include not using the word "free" at all when games contain in-app purchases, developing targeted guidelines for its app developers to prevent direct exhortation to children as defined under EU law and time-framed measures to help monitor apparent breaches of EU consumer laws. It has also adapted its default settings, so that payments are authorised prior to every in-app purchase, unless the consumer actively chooses to modify these settings.

Although, regrettably, no concrete and immediate solutions have been made by Apple to date to address the concerns linked in particular to payment authorisation, Apple has proposed to address those concerns. However, no firm commitment and no timing have been provided for the implementation of such possible future changes. CPC authorities will continue to engage with Apple to ensure that it provides specific details of changes required and put its practices into line with the common position.

Member States enforcers and the European Commission have also invited the associations of online game developers and platforms to reflect on concrete measures that they could take to address the issues raised in the common position, including the possibility for guidelines or standards incorporating the CPC position.

Enforcement, including possible legal action, is in the hands of the national authorities which will now consider how to address outstanding legal issues.

The European Commission and Member States will continue to monitor the issue and in particular the extent to which the engagements made have addressed in practice the concerns raised in the CPC position.

[Deal Alert] Moto X Going For At Least $100 Off With Coupon Code At Motorola.com