Despite the cutesy Tartakovsky-style graphics, the game is based on the upcoming movie, not the niche comics. The gameplay is a pretty cut-and-dried copy of Battleheart and its various imitators: you control your team on a 2D plane, tapping and dragging each one to re-position, attack, or defend in real time. Your party is made up of the five main characters, muscle-bound Drax, slinky Gamora, Rocket "totally not a raccoon" Raccoon, Groot the tree-thing, and legendary outlaw Star Lord. (Who?) Each one uses their own unique weapons and special attacks, along with RPG-style combo attacks with other heroes. You can level up your heroes, find better equipment, and recruit additional Marvel characters that I also don't recognize. 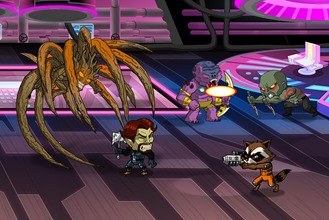 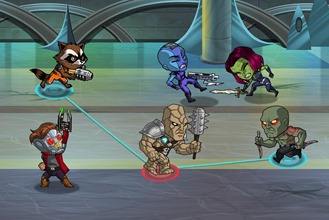 The main campaign takes you through a story that's presumably similar to the movie... though it starts with a talking dog, so I really can't say. There's also an arena mode where you can take on your previously-defeated bosses at any time. Guardians of the Galaxy has no multiplayer component, but this sort of game doesn't really lend itself well towards multiplayer anyway. Google Play Games integration is included for leaderboards.

Marvel seems to be perfectly aware that a game without free-to-play elements (or an always-on Internet connection, for that matter) is a big plus for some people - they've put both in all caps at the beginning of the app description. Both of Marvel's earlier self-published Android games, Avengers Alliance and Run Jump Smash, have leaned rather heavily on the free-to-play, pay-to-win model. Sending a few bucks their way for Guardians of the Galaxy would be a good way to reinforce positive development decisions. Hint, hint.

Google Addresses Custom Watch Faces On Android Wear, Says Developers Should Hold Off Until The ...