An image of what looked to be a Shield-like controller at the FCC last month had rumors swirling about a successor to NVIDIA's hybrid touchscreen-gamepad system. Well, it looks like that may have only been part of the picture because @evleaks has just dropped a shot of what is claimed to be the Shield tablet. Take a look. 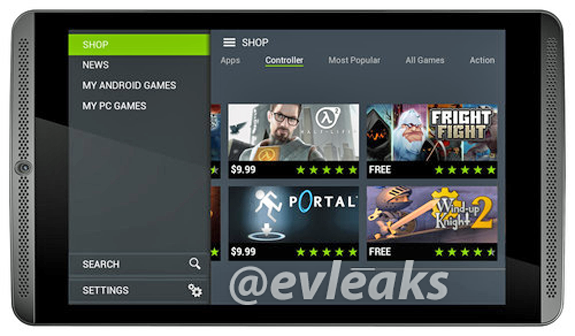 This device is remarkably similar to NVIDIA's Tegra Note reference hardware in regard to design language, so we're clearly looking at something they've created. No other information is provided. While it is very close to the Tegra Note aesthetically, there are some key differences - the arrangement of the front-facing camera, what looks to be an aluminum or metallic finish on the speaker grilles at the top and bottom of the device, and a shot of what I can only assume is an unreleased version of NVIDIA's Tegra Zone app.

Whatever it is, judging by the press-quality photo it's probably on the way at some point in the near future. We'll be on the lookout for any more news about this Shield Tablet in the coming weeks.

[Ooga Chaka] Marvel Releases A Guardians Of The Galaxy Action-RPG With No IAPs: You're Welcome GoTenna Looks Like A Pricey But Cool Way To Stay Connected When No Signal Is Available, Now Up ...