Captain's log, stardate 45638.2. A scan of a long-lost pleasure cruise that exited Earth in the late twenty-first century has yielded some fascinating archaeological findings. In addition to a pair of primitive foot coverings that Commander Data identified as "Converse All-Stars," a complete and mint-condition collection of the classic mythological saga known as Animorphs, and a small, vibrating "Furby" that Mister Worf immediately eviscerated, we have discovered a piece of anachronistic human technology. 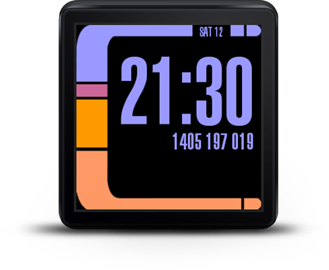 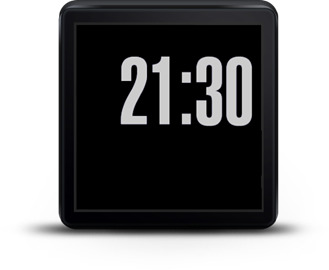 The device is called an El Gee Geewatch, and in itself is not notable - it's one of many artifacts that runs the Android operating system, an early precursor to Soong-type positronic matrices. But the time readout featured in one of its internal programs, the "Starwatch," is eerily similar to the LCARS display terminals on our own computers. Indeed, the 24-hour timekeeping standard is recognizable and analogous to the 24-hour clock kept on all Starfleet vessels, though the Gregorian calendar readout and something called Unix Time are not particularly useful to us. Commander La Forge informs me that this program was published on the Google Play Store in the early twenty-first century, and was available for installation without purchase. We are investigating possible time anomalies to explain the software's visual similarities to current technology.

In less notable news, one of the mummified inhabitants of the cruise has been re-animated via a subspace triolic wave initiated by a malfunctioning self-sealing stem bolt. The corpse seems to be attracted to Lieutenant Barclay, though whether it wishes to eat him or merely enjoy his companionship isn't clear. I've assigned Counselor Troi to oversee the matter - with any luck, they'll both be distracted from their usual disruptive tendencies. End recording.

A Fresh, Redesigned Version Of ESPN's Fantasy Football App Hops Off The Bench And Onto The Field

Minuum Demos An Android Wear Keyboard That Might Not Suck