Five months after demoing working InkCase Plus prototypes at this year's Mobile World Congress, Oaxis has taken to Kickstarter to get its hands on some cold hard cash. And it's paying off. Already the company has amassed over $100,000 in pledges, surpassing its funding goal on just the first day. The idea of a case that adds a Bluetooth-connected secondary e-ink display to a phone apparently has a lot of people plenty excited. As of right now, over 500 of them. Nevertheless, $30,000 of their funding has come from three $10k sales, $15k from five $3k sales, $13k from thirteen $1k sales, and $7.2k from eight $900 sales. At those rates, it only takes a few.

The original InkCase bound the display to the backside of a phone, requiring users to stick to one screen or the other. For the sequel, Oaxis is making the InkCase more versatile. People can use the screen in combination with a leather case (the FitCase) that rests it on top of their phone's standard display. From here, the InkCase Plus serves as a way to read notifications, ebooks, or a number of basic apps without having to turn on a handset's battery-sucking high definition display. 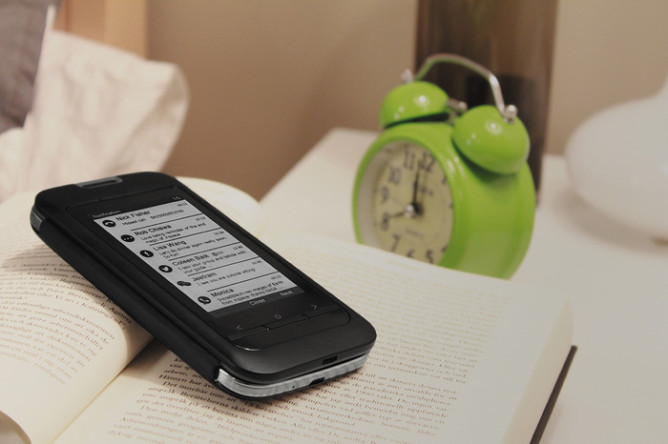 In this form factor, the InkCase Plus still requires people to play favorites with their phone screen. So Oaxis has provided the option for people to flip the unit around and opt for a dual-screen experience instead. Given the difference between the two displays, this will be far from a Kyocera Echo-style setup (which is probably a good thing). But it should allow for at least some degree of multitasking.

InkCase Plus resembles Pebble in a number of ways. Both rely on monochrome displays and only work with apps explicitly designed to run on the device. Oaxis has created a cycling app so that you can strap the unit to your handlebars and read real-time information as you peddle. The product can also pull down album art and control music playback. The company is inviting developers to create software using its SDK and APIs, but it remains to be seen what we can expect down the road.

With or without your money, this product is going to come into fruition. What matters now is how much you want to pay and whether you're ready to call dibs. The InkCase Plus will go for $139 at launch, but there's still time to claim one for at least $79. There are still twenty-nine days to go, but looking at how quickly the project has raised money, the lowest price may not stick around for long.