Let's face it, as the world becomes more dependent on computers and the Internet for the functions of day-to-day life, security will become ever more important. Clearly encouraged by employee Neel Mehta's discovery of Heartbleed, Google has decided to do more in the area of Internet security. To help combat this ever increasing problem, they're offering up Project Zero. Essentially, Google will begin hiring "the best practically-minded security researchers and contributing 100% of their time toward improving security across the Internet." Their work will not be limited to just Google products, but will instead be focused on "any software depended upon by large numbers of people." The idea is that researchers will find the threats, then inform only the software developer. Once the OEM has a patch ready, a public bug report will be filed in an external database accessible to anyone. The database will include information on the issue as well as time-to-fix data, discussion about exploitability, etc. 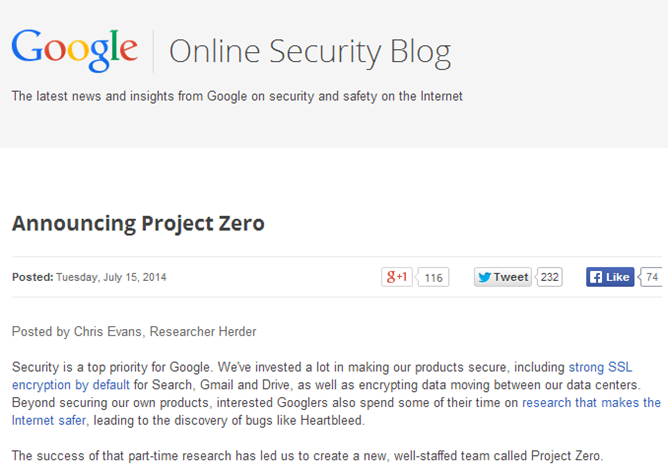 The implications of this are huge considering how much money and resources Google has at its disposal. With a major player such as this throwing its hat in the ring, this really can be nothing but a positive to everyone who uses the Internet and has put sensitive information thereon. These days, that's pretty much all of us.