Running Android on a PC seems like a good idea, until you actually look at the logistics of making the platform work on a non-touch interface. Add to that all the projects out there attempting to do so with limited or completely absent support for Google Play, and you've got a recipe for lame. Console OS was looking for a cool $50k to make Android work on PCs, and the company has succeeded with almost a month left in the campaign.

Console OS is going to be a fork of Android built to work on Intel-based PCs, which makes it crazy fast. Yeah, we talk all the time about how fast one ARM chip or another is, but they're fast in the context of devices that live in your pocket and have to run for a full day. A computer with a big, energy-hungry Intel Core processor is way faster, and that means Console OS has the potential to run standard Android games with higher-resolution graphics. Console OS is still a fork, but Mobile Media Ventures says it will be sticking close to the Android API stack to ensure compatibility.

So what about Google Play? Getting Console OS certified isn't possible as Mountain View's CTS is only for actual devices. Instead, the company is promising to ship with the ability to import Google Play purchases via a connector app on your phone or tablet. How this is going to work is still a bit murky. There will also be support for the Amazon Appstore and enhanced Android games through the official Console Store. 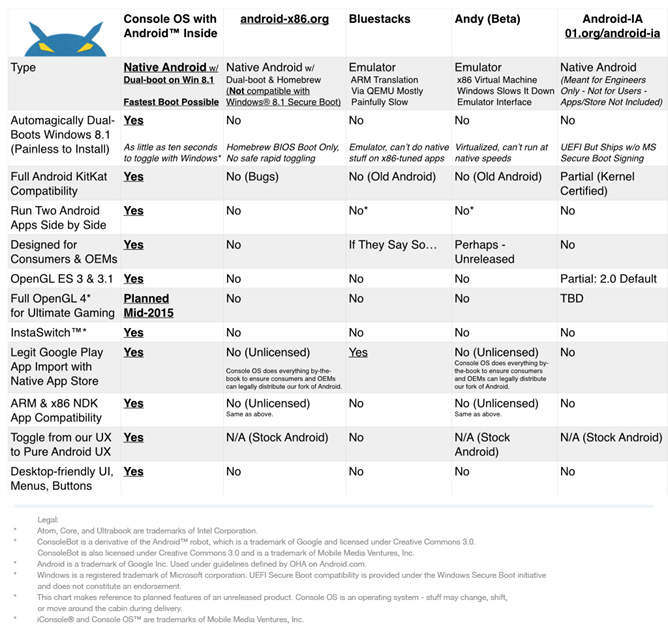 Console OS itself will be free, and Mobile Media Ventures plans to contribute code back to AOSP. The catch, however, is that Console OS has to be built for new devices individually (25 x86 laptops, tablets, and convertibles are already planned). If you have a supported device, you'll be able to dual-boot Console OS with Windows. The pro version of Console OS (planned for a $20 yearly subscription) will include a bunch of additional features like "InstaSwitch" for toggling between Windows and Android without a reboot and native DVR support.

Buying into the Kickstarter earns you a lifetime subscription to the pro version of Console OS, along with votes on which hardware gets support next. The higher tiers come with more licenses and extras like shirts (it wouldn't be a Kickstarter without shirts). The 1.0 release is planned for December 2014. Is it going to work? Your guess is as good as mine.

[New App] Wear Camera Remote Mirrors The Viewfinder On Your Watch In Real Time, But It's Not ...