Chromecast's new screen casting feature has a lot of us very excited, and understandably so: you can now... Android... on a gigantic screen, at the push of a button. Or touch, I guess. Anyway, screen casting is pretty awesome, but there's one thing that's bugging some people: latency. Now, if you're sitting right next to your router, and your Chromecast is also sitting right next to your router, the latency on screen casting generally isn't that bad (probably less than 100ms). But if you're like a lot of us, your home media setup may not be so ideally suited for optimum screen casting latency scenarios. And you're probably wondering: just how bad is this lag? I mean, sure, you can observe it, but as we all know, all measurable things are made immeasurably better by measuring them under as many circumstances as you can. So get ready to have some fun (or just satisfy your OCD).

This little trick comes courtesy of one of our commenters, Leif Sikorski, who is obviously a very brilliant man. To test your Chromecast screen casting latency, you'll need your Android phone or tablet, a camera (not the device's), and the TV that you're casting to. Ready for the easiness? Get the Android device at a usable angle for a photo that includes both its display and the television's, cast your screen, start the stopwatch timer on your clock app, and snap a photo (high ISO, super-fast shutter is best). Look at the timer's reading on the TV, and compare it to the reading on the Android device. Subtract the Android device's time from the television's, and you have your screen casting latency to a hundredth of a second. Ta-da! 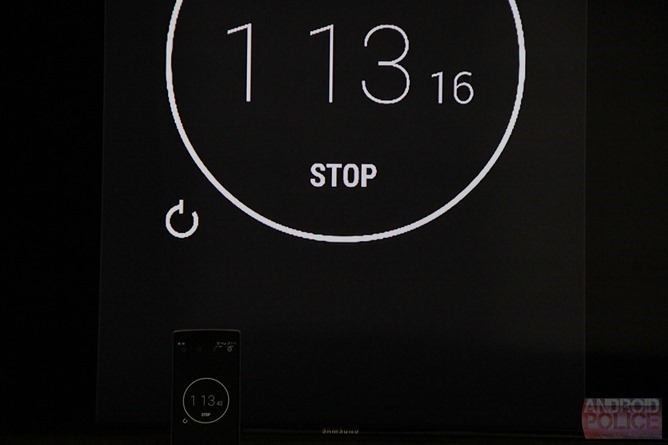 In this example, the latency is around 260ms - not exactly usable for gaming.

If you want to measure your latency in something like a video, game, or a particular app, you'll need some sort of floating stopwatch (if you guys have suggestions, please give them - a cursory Play Store search didn't turn up much worth looking into) app to do it. Alternatively, if you have a video player with a timecode overlay feature, you could probably measure it that way as well.

Pretty simple, right? Again, if you have tips in terms of apps to work out these measurements in particular scenarios (videos, games, etc.), let us know - we'll add them into the post.