Tablets that aren't iPads don't sell well on US carriers, probably because no one is all that keen on paying an extra monthly fee in order to use them and/or sharing a limited amount of data. (3G and LTE tablets are much more popular overseas.) So there's really no point in pre-ordering a tablet from a carrier, unless you absolutely have to have it on day one. If that's the case for the Xperia Z2 Tablet, let your fingers do the walking over to Verizon's website. 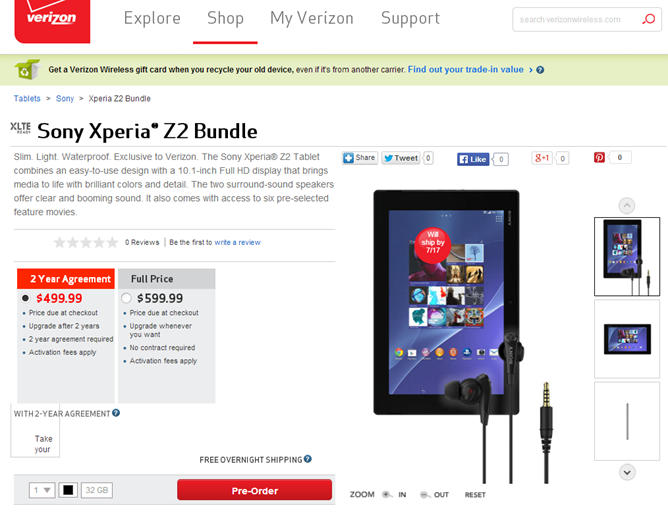 Yesterday Verizon announced that it would be the exclusive retailer for Sony's flagship tablet, and it's coming to Big Red on July 17th (next Thursday) for a hefty $599.99, or "just" $499.99 with a new contract. Now they've quickly put up an online store page for a pre-order, and the tablet "will ship by 7/17" along with its free Sony headset. Remember when expensive phones and tablets came with headphones as a matter of course? Good times.

The Z2 Tablet is a drool-worthy piece of hardware to be sure, with its Snapdragon 801 processor, 3GB of RAM, 32GB of storage plus MicroSD card slot, and a 1080p screen, all wrapped in Sony's gorgeous semi-waterproof body. And getting the Verizon version isn't quite as dumb as it usually is, since the hard-to-find WiFi version isn't much cheaper. Even so, I'm betting they won't have very many takers.

[New Game] Pay $3 To Win: FFFFF2P Makes A Statement On The Lamentable World Of 'Free To Play' Games