Verizon sure took its sweet time when it came to getting LG's latest flagship phone out. But if you're on Verizon and you've been salivating at the admittedly awesome G3, Big Red is now ready to your money. The G3 will go on sale next Thursday, July 17th, but you can pre-order it on the website now. The two-year contract price is $99.99, the off-contract price is the usual $599.99, and Verizon will let you split that up with its EDGE system if you'd like the option. 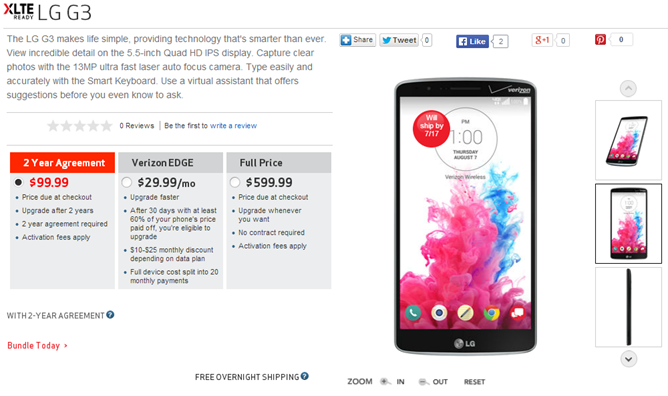 Whoever does the US branding for Verizon must be a beast, because they can push around international electronics manufacturers like nobody's business. Just like the G2 last year, Verizon's G3 is the only carrier variant with a logo crammed onto the front taking up a huge chunk of the top bezel. It's also worth noting that this is the 32GB model, which comes with 3GB of RAM (the cheaper 16GB version, which Verizon apparently isn't selling, only has 2GB). Other specifications, including a lust-worthy 5.5" 2560x1440 screen, a Snapdragon 801 processor, and a 13MP rear camera with optical image stabilization, remain the same.

The G3 should be in most if not all Verizon corporate stores next week, which is where I would go if you're not interested in waiting. (That's corporate stores, not the little hole-in-the-wall resellers that use Verizon branding and usually don't carry much in the way of real stock.) At the moment Verizon is offering the phone in black and white colors, though that may change at some point. Verizon will also be selling the Android Wear-powered LG G Watch, though it hasn't hit the website yet.

LG G Watch is available for purchase online starting today and in stores on July 17 for $229.99. When paired with a premium Android smartphone, such as the LG G3, or any other device running Android 4.3 or later, the LG Watch provides useful information accessible right on the wrist.

“With the LG G3 and LG G Watch, LG Mobile is redefining what that mobile experience should look like with smart technologies that bring relevant information to people when they need it most,” said Morris Lee, senior vice president and head of North American sales and marketing, LG MobileComm. “As the all-new G3 comes fresh on the heels of our continued success with Optimus G, G2 and G Pad, more and more consumers are walking into network provider stores and national retail outlets asking for LG mobile devices.”

Anticipation for the U.S. release of LG’s premium smartphone has been high; tech pundits and influencers have called the LG G3 the flagship Android smartphone to beat this year. Designed under LG’s “Simple is the New Smart” concept, the LG G3 will hit the shelves with enhanced hardware features and completely refreshed software for a simplified mobile experience:

The LG G Watch extends the adaptive technology functionality from the phone to the wrist. With the LG G Watch, users can access important and useful information, such as weather, fitness data, messages, search results, etc. with a quick tap, swipe or voice command. The LG G Watch is designed to be as functional as it is fashionable: