The art of needlessly re-naming manufacturer's phones for American carriers seems to have gone out of vogue in the last year or two - no more Droid Xyboards, no more Sprint Samsung Galaxy S II Epic 4G Touch. But in the case of the HTC One Mini 2, I think the original name was bad enough that we can forgive Verizon for wanting a rebrand. The HTC One Remix, which is almost certainly Verizon's rebranded version of the One Mini 2, was featured in a Verizon promotional video this morning. Unfortunately someone caught wise and set the video to private before we could get the post up. 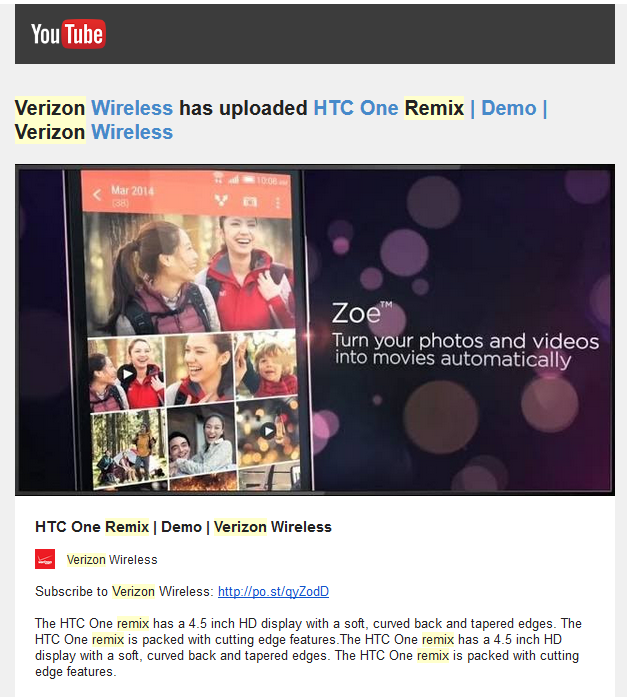 But our alert system documented the upload, including a description of the phone: 4.5" "HD" (read: 720p) screen, curved back, yadda yadda. We did get to see the video before it was removed, and yeah, it's the One Mini 2. A press image leak and an FCC filing show that the phone is pretty close to release, whatever Verizon decides to call it, and that's good enough for us.

The international version of the One Mini 2 features the metal build and front-facing speakers of the One M8 in a smaller body, but the specs have been downgraded, just like the original One Mini. It uses a Snapdragon 400 processor and one lonely gigabyte of RAM, with a single 13MP rear camera (which some users may actually prefer to the Duo Cam on the larger phone). Whenever the Remix lands in Verizon stores, it should be running Android 4.4.2 with Sense sprinkled on top.

Wearable Widgets v2.0 Adds Support For Android Wear, Can Send Any Widget To Your Watch