Statistically speaking, if you're using a pair of earbuds, they probably suck. And not just because you've been using the same dingy pair that you got with your iPod Nano back in 2006: even premium earbuds come with the same circular silicone pads (or maybe three or four sets if the manufacturer is feeling generous), none of which are likely to fit you perfectly. There are custom-made options, but most of them require you to visit an audiologist to make impressions, which drives up the cost of hardware that's already expensive. 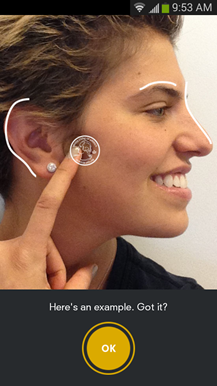 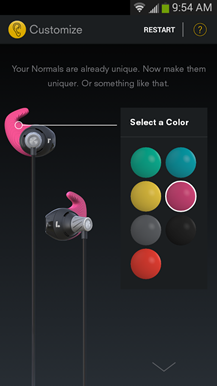 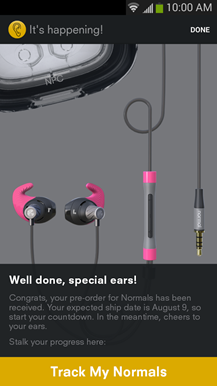 Normal hopes to streamline and mass-produce that process (or something like it) by combining some really cool emerging technologies. Install the app, take photos of each of your earlobes along with a quarter for scale, choose from a few funky colors, and Normal will print out a pair of custom forms for their earbuds, complete with a microphone and music controls. Then they throw them in a monogrammed case and ship them to you overnight... for $200. That's pretty pricey, but nowhere near as expensive as the previously mentioned custom-molded headphones.

Thanks, backwards-walking British guy. Way to dial up the creep factor.

Of course, as accurate as Normal claims its process is, there's just no way that it can give the same experience as something that's truly custom made. To start with, the 3D printed portion is simply for fit - it rests on your earlobe and doesn't actually go into your ear canal, so sound isolation is minimal. Still, if you're an audiophile looking for something in between a pair of Sennheisers or Shures and something ten times as expensive, Normal might be a viable alternative. The app is free to download and try; if you're in the New York City area, you can go to Normal's factory and have your headphones made right there.