The first Android Wear devices are just starting to show up on doorsteps, but already a second update is heading out to the Samsung Gear Live. The OTA bumps the build to KMV78X from KMV78V. What does it do? Unclear. 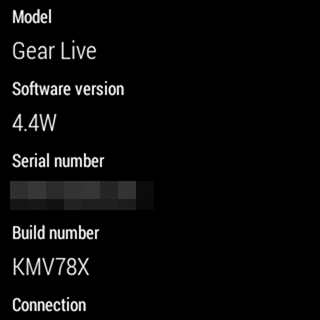 Some users are saying that calling a car via Lyft now works, but we didn't have an issue with that before the update. Perhaps it's improving the reliability of that feature, but there could also be various behind the scenes changes that aren't apparent to device owners.

If you've got a Gear Live, the update should show up soon. The G Watch is still on KMV78V with no reports of an OTA yet. No guarantee it will, though. The update might be Gear Live specific.