Though we just finished up our rumor recap for pre-I/O leaks and rumors, we've received information regarding Google's plans for the Play Store suggesting that Google may be building cross-device app restoration into the store's Android app.

Information is sparse so far, but from what's available to us, it appears that Google may be working on new functionality to restore apps and "data" to a new device, based on the data accrued on another device. Right now, the initial setup process for an Android device includes a "backup & restore" option that, try as it might, remains vague on exactly what the user will get. The option (which only appears during initial setup) promises data backup and restoration, but takes sort of an all-or-nothing approach to app restoration, where tons of apps - generally including some you don't want - start an immediate restoration. 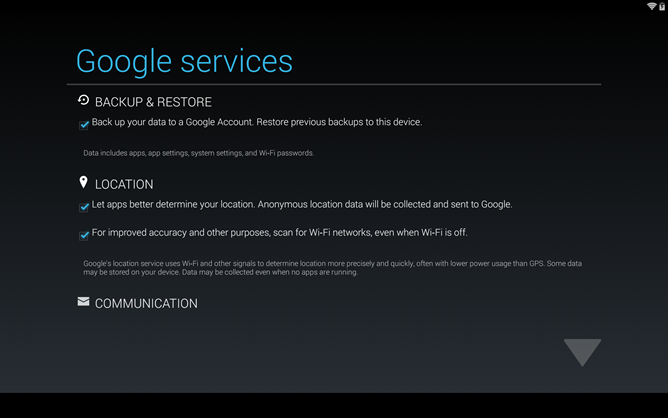 The new restoration process will apparently be part of the Play Store app itself, and would allow users to choose from a list of backups from their other devices, so if you're setting up the Play Store on a new (or freshly wiped) phone, you could choose to restore a backup from a phone, thereby restoring all your phone-specific apps and eschewing the apps you use only on tablets or other devices. Our information also indicates there may be an option to add on individual apps to the backup you choose.

What isn't clear right now is exactly what is meant by data. Of course restoring actual app data between devices would be a boon for Android users, but it's just as likely that the new feature is using "data" in the same vague way as the current setup process.

The feature appears to be early in development, so we may not see it debut immediately (if I had to speculate I'd guess it's being built out for the actual L release), but the functionality would be a very welcome departure from the current restoration behavior, which lacks the clarity and control this new feature seems to promise.