If you're one of the few people who sprang for Verizon's pricey, LTE-enabled edition of the Samsung Galaxy Note Pro 12.2, you may have noticed a software update in your notification bar today. The KOT49H.P905VVRUANE4 update isn't all that notable; most of the actual content comes from updates to a bunch of the bundled-in Amazon and Verizon apps like Kindle and VZ Navigator. But there are some bug fixes and a couple of security extras you might want to grab. 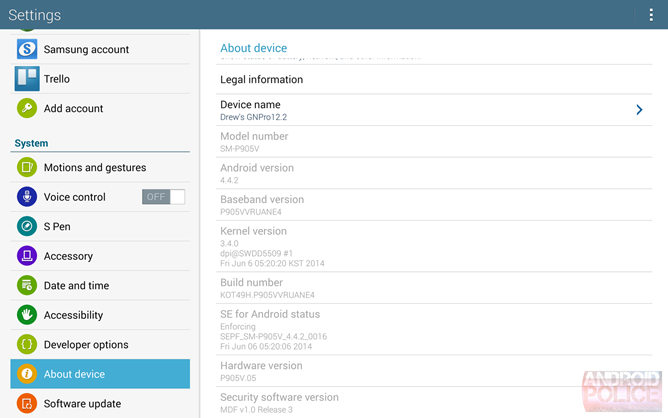 According to Verizon's support page for this update, a bug fix for the default Calendar app has been implemented, as has a stability fix for the Science and Technology sections of the Magazine UX. There's also a new option to wipe local content from the lockscreen for "all lock methods including password, PIN, pattern and biometrics." That last one is a puzzler, since the Note Pro 12.2 doesn't have a fingerprint scanner - maybe someone copied the boilerplate text from a Galaxy S5 update. Wiping your tablet via Android's built-in reset function in the Settings menu will now erase all data on the MicroSD card as well, which might be worth noting if you keep, well, anything on there.

Other than that, you get new widgets for WatchOn, Hancom Office, and a 1x1 button for Google Drive, one fewer for Google Search, and an adjusted 4x4 New York Times widget. The software version is still Android 4.4.2, so if you happen to have rooted your tablet, this one is probably okay to skip. Everyone else, you'll probably see it sometime later this week if you haven't already.

[ಠ_ಠ] The First Game For Android Wear Is A Flappy Bird Clone, Because Screw You, That's Why