The remaining three phones are the One M8, Moto G, and Galaxy S4. The S4, though, has been continuously out of stock for around three weeks now, so its demise seem inevitable, as well. A long-rumored Galaxy S5 GPE device has yet to materialize, though, even after months of the phone being on the market, and the introduction of the altogether unexpected Samsung Gear Live Android Wear smartwatch. 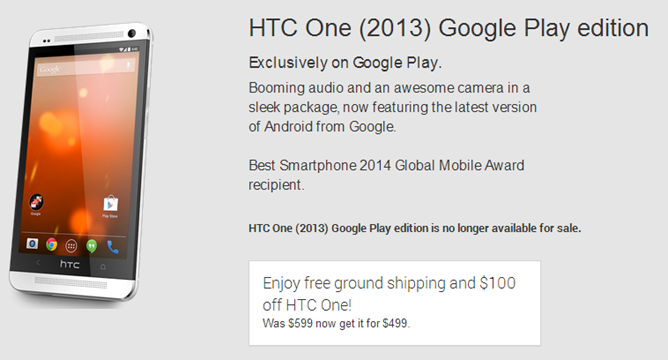 Could Google Play Edition devices be winding down? Or are we merely in a holding phase while Google ramps up the next generation of GPE hardware? It's hard to say. With rumors swirling around Android Silver and the upcoming Nexus tablet, Google Play Experience devices may end up being deprecated as unnecessary. They clearly were never intended to be sold in mass quantities, that much is sure.

We'll keep you updated if anything else changes on the GPE device front in the coming weeks and months.