Games made specifically for Android Wear devices were almost inevitable. Despite the small size, there's a lot of potential for Wear integration for full-sized Android games - you could use your watch as a Star Trek-style alert system for an RPG, or as a fun secondary screen, like the Visual Memory Unit on the old Dreamcast. Even games limited to Wear itself could do a lot with simple taps or swipes. So the fact that the first Android Wear game we've come across is a Flappy Bird clone, is, you might say, a bit disappointing.

Meet Flopsy Droid. It's a Flappy Bird clone in every sense of the term: one-touch gameplay, constant forward motion, weird arc physics. There's no phone portion of the game, just download the app from the Play Store and it will appear on your wrist. The pixelated Bird is replaced with the default Bugdroid green robot, which I must admit, actually has more visual fidelity than the original character. I might be a bit more impressed if the Android wasn't the only thing to get a significant visual change - couldn't you make the usual pipes Holo-colored or something? 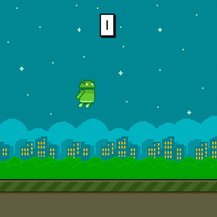 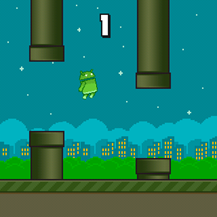 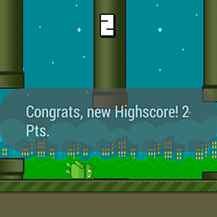 I know this is probably more of a proof of concept than anything else. Wear games are possible. Woo. We've got more than 30 years of video game history to choose from  - Breakout would have been perfect. The developer could have chosen an endless runner with a similar one-tap setup. It could have been a 2048 clone with fewer cells. Do you have any idea how many crappy promotional emails we've been sent for Flappy Bird clones? Why, why, why did it have to be Flappy Bird? WHY?!?!

Flopsy Droid is a free download. It should work on both the G Watch and the Gear Live.