A little over a year ago, I reviewed the Yantouch BlackDiamond3, a visually appealing speaker that makes a show of the music thanks to its 16,000-color LED lights. While a decent little speaker, it had a few downsides – namely the lack of a battery and unsatisfying low end. The company is now back with the speaker's successor, the Diamond+ ($150), which fixes at least one of those issues.

This model comes in two different colors – white or black – with each one being appropriately named (IceDiamond or BlackDiamond). I'm reviewing the white one, but aside from color, they should be identical.

I'm just going to be blunt here: the Diamond+ is almost exactly like last year's model. Literally the only aesthetic change is the plastic grills that cover the drivers on either side. Otherwise, it looks identical to its predecessor. Functionally, it's also very similar to the Diamond3, but there are a few small changes with the remote. But all in all, it's the same speaker with the addition of a battery. 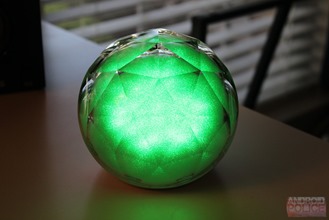 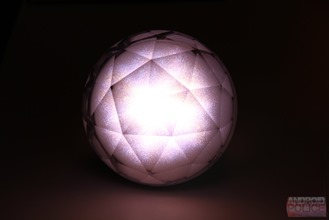 I don't think that's necessarily a bad thing, though. It still doesn't sound that great – it's just small sounding. It's lacking a lot of the dynamics that other speakers at this price point have, but I feel like it makes up for that with the brilliant light show.

Compared to last year's model, Yantouch has made a few changes to the remote. The Diamond+ has a couple more buttons (mostly for easier changes), but the overall functionality still remains the same. The Bluetooth/Aux-in button has been split up into two separate buttons now, and the forward/back buttons on the light control section have been removed. There are now a few different options for tempo lighting (where the light reacts to the music), whereas before there was only one. Other than that, you're looking at an identical speaker. Since I already reviewed it once, I'll just direct you to that review instead of typing the same thing again.

Instead, I'd rather focus on the things that make this model different: battery life and the companion app. One of those things is good, the other is absolutely terrible. I'll let you wager your guess before proceeding.

On the battery front, you'd think that the combination of streaming music and the lights would lead to something like 26 minutes of life, but it's actually much better than that. On average, I was actually able to get about six hours or so with the lights on the entire time and a Bluetooth stream at about half volume. It's not breaking any records, but it's more than I expected.

It's worth noting that if you're playing music and need to plug the speaker in, it kills the connection and reboots the speaker for some reason. It's strange and annoying.

And then there's the app. Oh. My. Word. The app is horrible. Like, I don't even understand how it exists. I thought things this awful imploded on themselves and vanished into the pits of the earth or something. That said, it actually has some useful features that are exclusive to the app...when you get it to to work, that is. 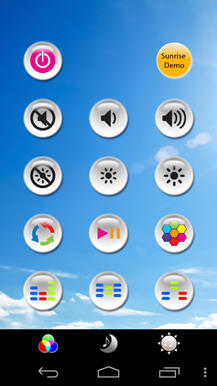 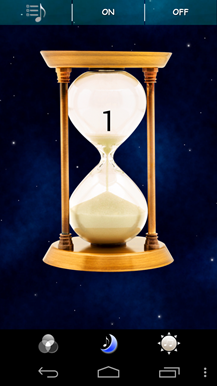 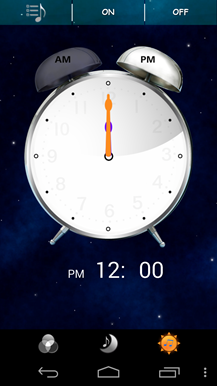 Once upon a time there was an ugly app. It was so ugly that everyone died. The end.

So, first off, it's called "BedTimeSocial" ... which sounds a lot more like some kinky app that you'd find ads for on questionable places around the internet. I'm still trying to figure out why it's called that, but whatever. It can basically replace the speaker's remote, as the main interface is an exact replica of the remote that ships with the speaker. Only a little more wonky and distorted. It works well enough for the most part, but the remote itself is much more efficient.

It also has a sleep timer, allowing users to select a playlist (locally stored music only, of course) and it'll shut the music off after the specific amount of time. Alongside the sleep timer is an alarm clock, which not only wakes users to music, but uses the speaker's lights to somewhat emulate a sunrise. For those who are curious what that may look like before using it, there's a "Sunrise Demo" button on the remote section of the app, which basically executes the light function. Spoiler alert: it gets crazy-bright.

So, who is this speaker for, exactly? Not for those who own the Diamond3, that's for sure. It's just not worth spending $150 for a new speaker that just adds a battery. Those who may have been interested in last year's model, but wanted something with a battery – this one is for you. Like I said, it's lacking low end, but the overall experience this speaker offers is fantastic. Despite not having the sound quality that I prefer, the Diamond3 was one of my favorite speakers to date just for the pure novelty – and that's even more true with the Diamond+, thanks to the built-in battery.

This Handy Xposed Module From The Developer Of XGELS Will Let You Toggle Auto-Correct With Just ... Android "L" Feature Spotlight: You Can Now Copy From The Status Screen With A Long-Press