Samsung's Gear Fit, the smaller, sleeker alternative to the company's other smartwatches, is probably the most interesting of the second generation Gears. If you've been coveting one, now would be the time to buy it: Amazon has it for just $99.99. That's a full 50% off the $200 retail price, and notably below alternatives like the Pebble smartwatch and the new Android Gear watches. As usual, Amazon Prime users in the United States can add free two-day shipping to the deal. 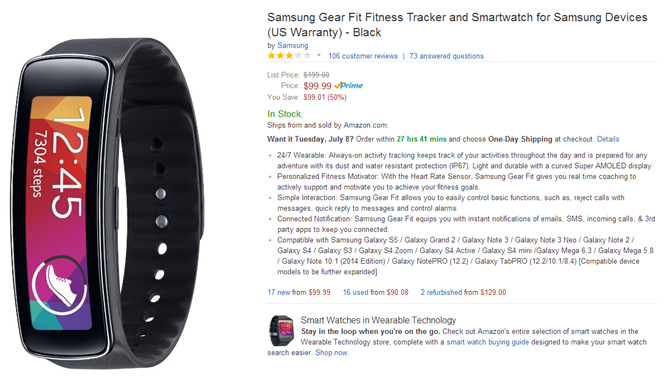 Seeing such a steep discount on the Gear Fit so quickly is strange; it's been just short of three months since the device was released. That indicates that sales haven't been what Samsung expected, or at least, not what Amazon expected - it's entirely possible that they're sitting on too much inventory and want to get rid of some of it. This isn't a Gold Box deal or another special promotion, so presumably it's simply the "regular" price from Amazon, at least for the moment.

The slim, curved screen on the Gear Fit makes it an interesting and fashionable alternative to the larger Gear 2 and Gear 2 Neo, not to mention a less obtrusive fitness companion. Aside from the size and screen difference, the Fit foregoes call forwarding, voice control, an IR blaster, a camera, and a home button, focusing on notifications and fitness functions like the pedometer, IP67 water resistance, and a heart rate monitor. Like the other Samsung wearables, it will work only with other Samsung devices, so owners of phones or tablets from other hardware vendors are out of luck.