Owners of the LTE variant of the Nexus 7 2013 have kind of been left out in the cold when it comes to the latest Android updates. While most of the other current Nexus devices (including the WiFi version of the same tablet) are running Android 4.4.4, a lot of N7 LTE users are still back on 4.4.2. Those who know their way around a bootloader can install the factory image for 4.4.3, but until now there was no standard over-the-air update. 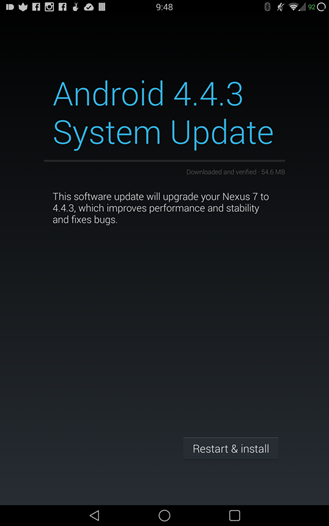 Bill Stebbins is clearly rooted, but the download is genuine.

It looks like the OTA update may finally be going out - we've seen at least one user who's been given the alert. You can download the KTU84L file and flash it manually if you're tired of waiting. There's no need to be rooted or have an unlocked bootloader, just follow this handy guide, substituting your files and hardware. Or you could just wait for the 4.4.4 update... but you may be waiting a while.