Google began its transition to Hangouts as a universal messaging platform a little over a year ago, but true SMS integration didn't arrive until much more recently. To encourage use of Hangouts, the company offered forwarding of Hangouts messages via SMS in select countries, but now that's going away as of tomorrow. 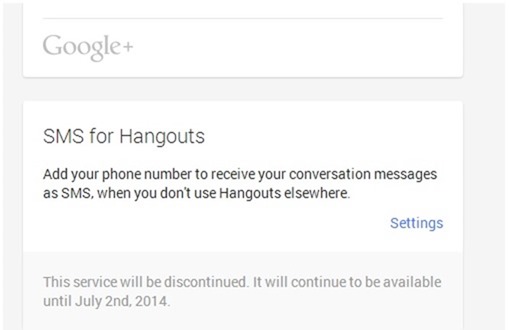 The feature was confusingly named "SMS for Hangouts," and was basically a way to forward notifications. If a user didn't have a data connection, Google would forward Hangouts messages via SMS. It was only available in countries with limited mobile data connectivity like India and Guam. Now that the Hangouts app supports SMS natively, Google must feel less compelled to keep up with this feature.

This doesn't affect SMS support in the Hangouts app, despite the strange name for the fallback service. Google hasn't talked about this feature publicly or made any updates to it, so perhaps adoption was never very high in the first place. Someone will probably feel personally offended by this move, though. Acer Iconia One 7 Lightning Review: Basically What You'd Expect For $130