Android Studio was first introduced to the world a little over a year ago at Google I/O 2013. At the time, it was coined a "Developer Preview" to indicate that it wasn't ready for major development projects, but people were welcome to experiment with it. In the following months, Android Studio has progressively improved, swatting many of the bugs and adding truly valuable features for developers and interface designers. After a long, and sometimes frustrating road, the upstart IDE is finally trading in its 'Developer Preview' moniker in favor of a shiny new 'Beta' tag.

Alongside the title change, Android Studio v0.8 also gained an array of brand new, and much needed features. Right out of the gate, this update includes compatibility and features for the just-released SDKs for Android Wear, Android TV, and the L Developer Preview.

The 'New Project' dialog now includes the current Android Version Distribution numbers along with descriptions of the features in each version to make decisions about which minimum API level to set for your app. There is also a new workflow for adding templates based on which devices are supported (e.g. Wear, Glass, TV). Tabs have been added to support different product flavors within gradle build scripts.

The layout renderer may be one of the biggest winners in this update. There is now an in-place interactive overflow menu that also makes navigation to menu files a single-click affair. Support has been added for the Material theme. And there is now an additional parameter that can take into account API versions and produce the proper look of a layout across multiple versions with their associated themes. The IDE also has a lookup feature to see what colors and effects have been applied to an element through theming. 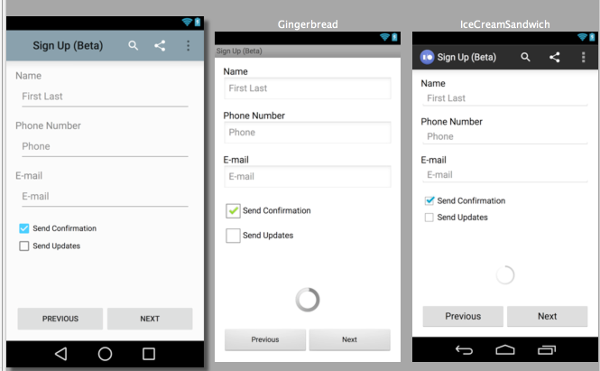 Not all of the changes are limited to the IDE, there are also new bits in Gradle and the wrapper, especially in the realm of code variants. The list of new concepts and features is a little daunting, but some of the biggest bits include: multiple-apk splits, improved dependencies, and support for Manifest Merger (a little secret, Google has been using this internally for a long time).

Take a look at the "What's new in Android development tools" video for a wild ride through the current state, new features, and a couple of plans for the future.

Unfortunately, updating the previous version was deemed impractical, so a fresh download of Android Studio is required to install v0.8 beta. Keep in mind, you don't need to re-download any SDKs, just the IDE itself. Make sure that you don't delete the existing SDK folder while upgrading. There are also new emulator images for the Nexus 5 and Nexus 7 based on the L release, so it's easy to start testing code even if you don't have the two devices that are already supported.

There's no question, this is a major update and it demonstrates a serious commitment to making Android Studio the first-class IDE for app development. The team seems intent on making fewer breaking changes and maintaining a deprecation period for things that need to be removed, so we should start to notice less updates that require regular re-jiggering to keep them building. Keep up the good work! [Updated] Blu Announces KitKat Updates For A Handful Of Devices, Rollout Will Begin 'In The ...