It's no secret that we think the Galaxy Tab S series are the best tablets you can buy right now. They're also not cheap - Samsung's priced its iPad competitors at iPad prices, and that means shelling out at least a cool $400 if you want to get in on that Super AMOLED goodness. Best Buy, though, is willing to give you a whole Benjamin off the MSRP if you give them a little trade-in action, though. 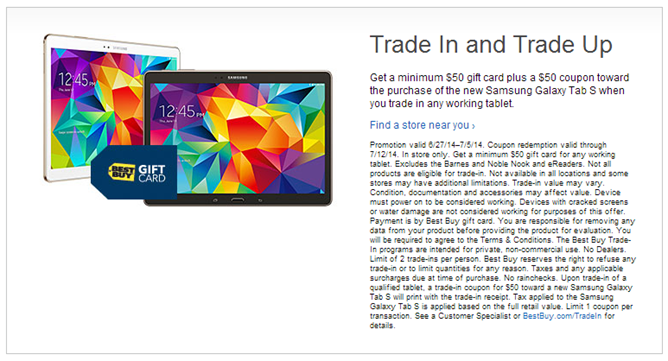 Bring any working (key word there) tablet that isn't a Nook in to your local Best Buy and you'll get a minimum $50 gift card plus a $50 coupon off any Tab S model. That adds up to $100 total off, at least - pretty legit savings, if you ask us. So, if you've got some ancient Acer or no-name tablet lying around that isn't worth its weight in eWaste fees, take it on over to Best Buy - even if you don't want the Tab S, you'll still end up with a $50 gift card.