We knew this was coming, but Google just showed off the Android L release at I/O 2014. The entire thing appears to be based off off what we've come to know as Quantum Paper, but they're actually calling it Material Design in the release. It's so sexy.

It's definitely a very content-driven interface, with simplicity and minimalism the primary focus with the primary UI. 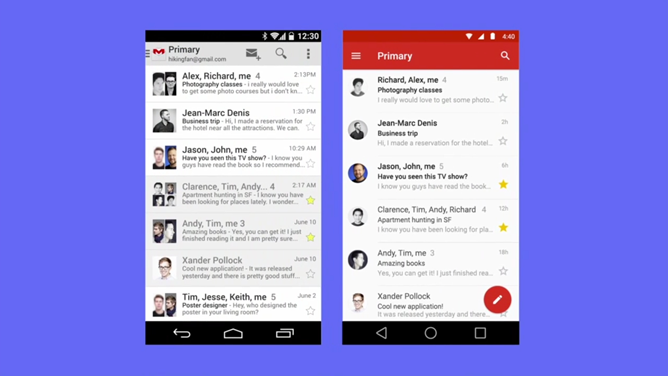 L appears to be a pretty major overhaul in both form and function, with things like enhanced lockscreen notifications, new navigation buttons, and a focus on fluid design and animations that make sense. There's also a move towards improved security, especially for those who use "Bluetooth watches" (cough, Android wear), where the phone locks itself tight when the watch goes out of range.

But that's not even the exciting part: they announced that the L preview will be available for download on developer devices later today. Turns out that means Nexus 5 and Nexus 7 in Google speak.

Oh, also, they still aren't giving up on the name. Just calling it the "L release." Dammit, Google.

There's a lot more to learn about the L release design and interface, including Material Design on the Google Design page.