LG's G Watch is one of the first two devices to launch with Android Wear. The G Watch, along with Samsung's Gear Live, are expected to be available for pre-order from the Play Store today, so it's worth taking a quick look at how the two stack up. The Gear Live is still awaiting our hands-on treatment, but we've already spent a little time with the G Watch.

For those who aren't caught up, LG's first Android Wear entry is a 37.9x46.5x9.95mm smart watch with a 1.65" IPS display at 280x280. It's running a 1.2GHz processor and carries 512MB RAM and 4GB internal storage, plus a nine-axis sensor that LG says is more accurate than those in other smart watch offerings.

From a design perspective, the G Watch isn't immediately striking as a beautiful device. It has considerable space around the display, and is a flat slab (made from a single piece of stainless steel, according to LG). But LG says the flat slab form factor is actually better, because the human hand and wrist won't be impeded during any normal motion. Speaking of the body, it's rated at IP67, meaning it's dust proof and water resistant up to 1m for 30 minutes. 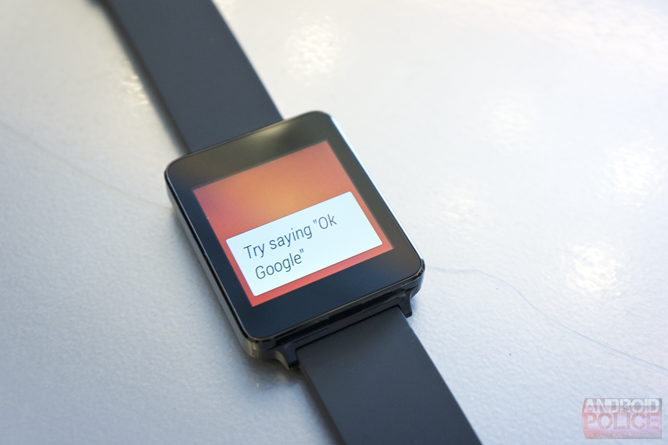 Elsewhere, the design is very simple. The watch of course lacks any physical buttons, since the display is always on. One face of the device has a microphone for detecting audio, while the back has a reset button (okay so there's one button) and pogo pin connectors for charging.

One refreshing feature of the G Watch is that it's compatible with standard 22mm watch bands, so there's no real need to wait for LG to come up with more specialized bands. 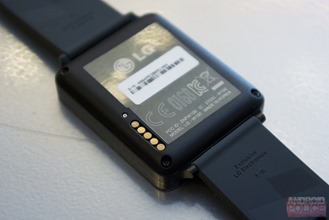 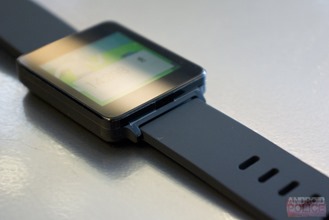 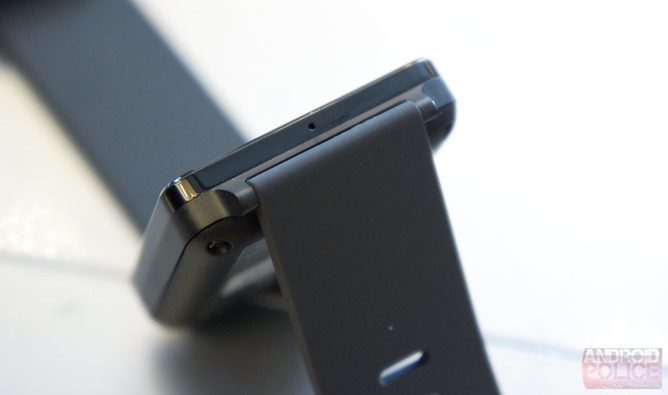 The charging apparatus for the device is a simple slab with a curved interior to support the G Watch's frame. It gets power through a microUSB port located on the face opposite the pogo pins. 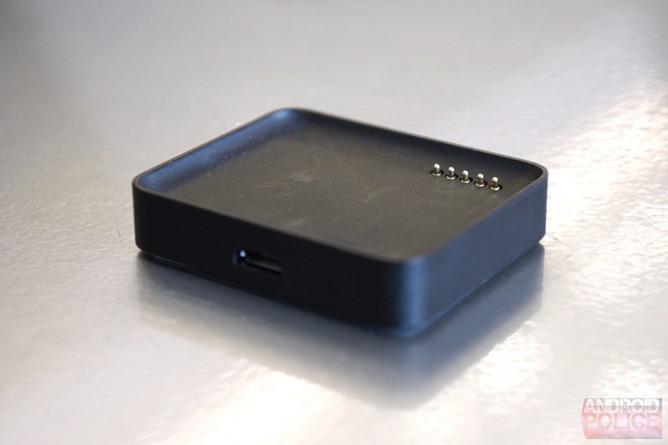 The device is just a tad thicker than the Nexus 5 at 9.95mm vs 8.6mm, but the device only weighs 63g so it doesn't feel too heavy sitting on top of your wrist.

Of course the other watch announced today (with impending availability) was Samsung's Gear Live. The two actually share a fair number of specs - the Gear Live is also rated IP67, carries 512MB RAM, 4GB internal storage, and a 1.2GHz processor, and is also compatible with 22mm watch bands. Samsung's watch includes a heart rate monitor, but the trade-off is the Gear Live's smaller battery, at 300mAh vs LG's 440. The Gear Live is also thinner at 8.9mm, and weighs just 59 grams. Its display, at 1.63" is 320x320.

One thing to consider for those thinking about picking up one of the devices is that Samsung's offering is just $199 while LG's is $229. If you don't mind a slightly smaller battery, Samsung's watch is probably the way you want to go.

During our time with the G Watch, all units were in retail mode, promoting the various capabilities of Android Wear, so the full UI was not exposed. That said, we'll have a full review up some time soon that should clear up any and all questions that remain about LG's new watch.

Audi The First Car OEM To Announce Timing For Android Auto, New Models In 2015 Will Feature The ...