A while ago, we posted about explorations Google was undertaking in revamping Android's home screen. Part of this was a new notification shade that looked similar to Google Now.

Since then, we've seen new materials that show something a bit closer to what the notification shade and Quick Settings will resemble in Android's L release. The images we'll discuss in this post are based on more recent information, but as with any unreleased software, anything can change - particularly design.

Since this is a design-related post (and not something that we have code-based evidence for), we'll be treating it as a normal rumor for now. This one gets a confidence rating of 7 out of 10. Points are deducted simply because we've already seen a previous iteration of this which looked different and while this material is newer, there's no way to be certain that it is the final interface or implementation.

That said, sources familiar with early L builds indicate that the Quick Settings interface we'll see is accurate to non-final builds, so we are still fairly confident that something like this will be in Android's L release.

This is fairly simple - basically, Google is working on making a Quick Settings pane for Android that is sleeker, looks better, and - most importantly - allows users to manipulate controls on a deeper level than the current implementation.

Currently, most things in the Quick Settings panel like WiFi, Bluetooth, etc. can be toggled on or off, either by a press or a long press. Things like brightness bring up a special snippet interface, and other items link directly to the Settings app. Having functionality scattered in this way isn't ideal, but the new Quick Settings looks to change that.

When clicking a tile in the new Quick Settings interface, the pane would transition to information/interface specifically related to that tile. So, if you press the WiFi tile, you'll get a pane (in the same space) with a list of networks and the option to toggle WiFi on or off. Likewise if you press the battery percentage, you'll get a quick glance at battery usage data, and so on.

Another advantage to this implementation is that notifications and Quick Settings can occupy the same space visually, with a swipe gesture switching between the two rather than a dedicated button.

Understanding this functionality is really easier if we have something to look at, so let's skip ahead to the evidence.

As with our other rumor posts, we won't be sharing source images here. What you will see are our recreations of the interface based on what we've seen and our understanding of how things work based on the information provided. These are mocked up as faithfully as possible to the source images without retaining any possibly identifiable information.

When a user swipes down to see the notification tray, they'll be greeted by a dark overlay with the same Now-like notification cards we saw before (plus their profile photo). As you might expect, these can expand or collapse as needed. If the user taps on the bar at the top or swipes down, Quick Settings will transition into view, and the notifications turn into a tidy stack of cards at the bottom of the display. 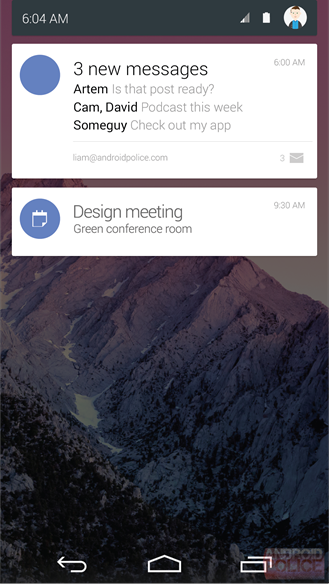 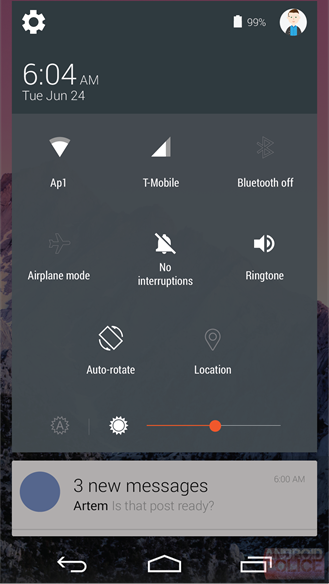 You might notice the bell icon (which showed up in yesterday's L screenshots) in the center of the Quick Settings interface. This represents a new feature in L that will allow users to limit or prevent interruptions from notifications, likely specifically aimed at "heads-up" notifications, which have been re-styled for L to look like the Now-ish notification cards we've seen above.

One thing to note about heads-up notifications, while we're on the subject, is that they don't appear to be modal. That is, users can still interact with whatever they're working on while notifications pop in.

From what we've seen, the card simply comes into view, waits a moment, and then fades away. Users can also swipe them out of the way if they don't feel like waiting. As a side-note, we have seen information indicating an "Incoming Call" heads-up notification in tablet layouts, but we'll let your imagination fill that one in.

Back to Quick Settings

Now we'll take a look at a few of the specific tile interfaces available. 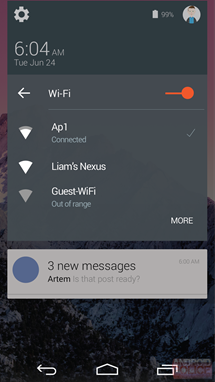 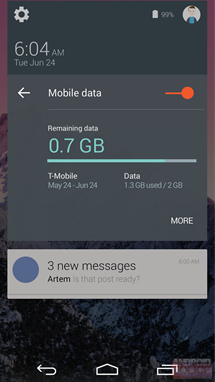 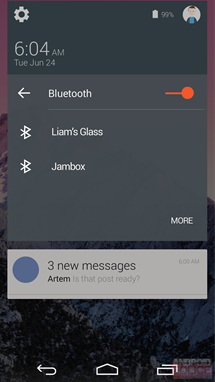 The "MORE" link at the bottom of the pane would take users into the full Settings app for further manipulation or viewing.

It also appears that Google is drawing from its new color palette for this interface. Through the leaks we've seen, a clear palette has emerged, and the bold orange and muted cool gray colors are both included. The orange color seems to be reserved for toggles and sliders, while the mint green shows information, and the muted cool gray serves as a backdrop.

The changes Google is exploring for Quick Settings are exciting. The panel itself was a great idea when it was first implemented, but the UI as it is just isn't perfect. These changes would bring it several steps closer to that goal by creating a cohesive experience that doesn't require users to jump into various UIs to achieve common settings tasks.

The good news is that with Google evidently set to show off L tomorrow, we shouldn't have to wait too long to see the Quick Settings pane's final implementation.

Netflix App Updated To v3.6 With A New Logo And Tweaked UI