Have you ever seen marionette puppets feign a martial arts battle? They look a lot like the fighters in Dragon Finga, a 2D brawler that lets the player control multiple points of articulation at once to take on enemies. Usually rag doll physics in 2D games look a little janky (see Flop Fu for a good example), but Dragon Finga's tongue-in-cheek take on classic Hong Kong fighting cinema is a surprisingly effective game in its own right.

Frantic taps and swipes move your fighter across small 2D stages, striking opponents (many of which are pots) as limbs flail like a hinged paper doll. You got the usual attacking minions which can be anticipated and avoided, and power-ups can unleash special attacks or refill your health bar. But the game's engine uses a literal ticking clock: the only way to get more precious seconds in each stage is to beat the crap out of bad guys, necessitating a fast and flowing attack pattern. 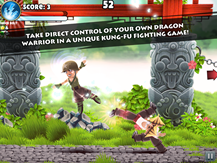 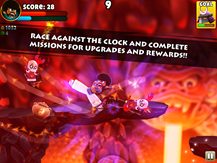 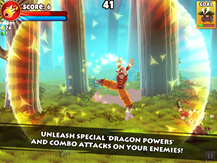 Unfortunately, while Dragon Finga displays some original ideas and some excellent art and sound design, the game falls into the usual patterns of modern free-to-play titles. Continue items are rare, and the only real progression comes from acquiring in-app currency and using it to customize your player character. Advertising and social pushes are basically constant, to say nothing of the same dual-currency IAP seen in a thousand other titles. So if that sort of thing bothers you, you might as well pass on this game.