The Chromium Issue Tracker, a perennial source of accidental "leaks" and unreleased information, has delivered something interesting (the issue appears to have since been removed). Reddit user Doopl came across two screenshots of what look like Android's yet-unannounced L release.

The shots show a Google account login dialog that looks substantially different from the current implementation, and what appears to be a re-styled Chrome with design elements from Quantum. Additionally, the status bar shows a place holder "L" icon, and a bell icon that sources tell us is indicative of a new feature in L that will offer "limited interruptions," basically muting or partially muting notifications. Since (according to our information) heads-up notifications are expected to appear in L (significantly re-styled to look more like Google Now cards), this feature may keep them from popping up over whatever the user is working on.

The shots are 1280x768, indicating that they're from a Nexus 4. Also of note is the fact that the screenshots don't show background protection (the subtle gradient) behind status and nav bars. See for yourself: 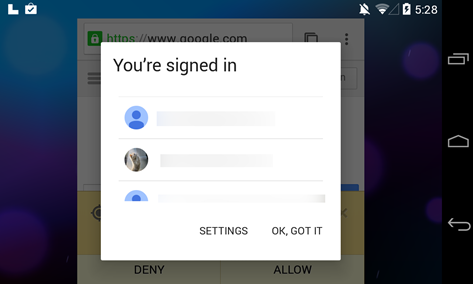 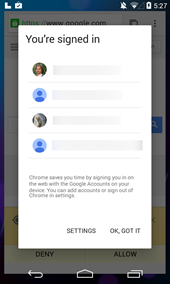 From what we've seen in leaked information, the screenshots look to be the real deal. The revamped nav buttons don't seem to be in place yet, but as explained in a previous post, the "Google" button is still in exploration. Hopefully, we'll hear more about L at I/O, even if it isn't expected for release until Q4.

[Update x2] UpgradeSwap Has Stopped Buying Used T-Mobile Phones, And You Probably Should Too