Update 2: And now it's showing up for purchase on the UK Play Store - 1000 of your pounds will buy an Explorer Edition Glass in one of five colors. The same free frame / shade deal going on in the US is also available for the UK version. (Thanks, Ben!) Here's the official UK landing page for Glass, too.

Accessories seem to line up, as well - all the shades, frames, the stereo and mono earbuds, carrying case, pouch, and spare charger are all available for purchase. Here's the official announcement on Google+, and you can watch a video about Glass in London or something below.

The Guardian apparently has teamed up with Google on the launch, and announced its own Glassware app today.

Update: A second support page all but confirms it: Glass is coming to the UK. This Glass-specific product info page states in no uncertain terms:

Glass is currently authorized for use in the United States and United Kingdom. You are responsible for complying with all applicable laws, including with limitation export and import laws and regulations.

So, yes, it looks like Glass is slated for its debut outside the US. Given the timing, we can probably expect an announcement either at I/O or possibly even today. We'll be on the lookout.

We tend to call it like we see it, and right now, we're seeing Google Glass on the Google Support page for Play devices. If you're not seeing it there, it's either because A.) Google has taken it down, or B.) we're all on some pretty crazy and persuasive designer hallucinogens. 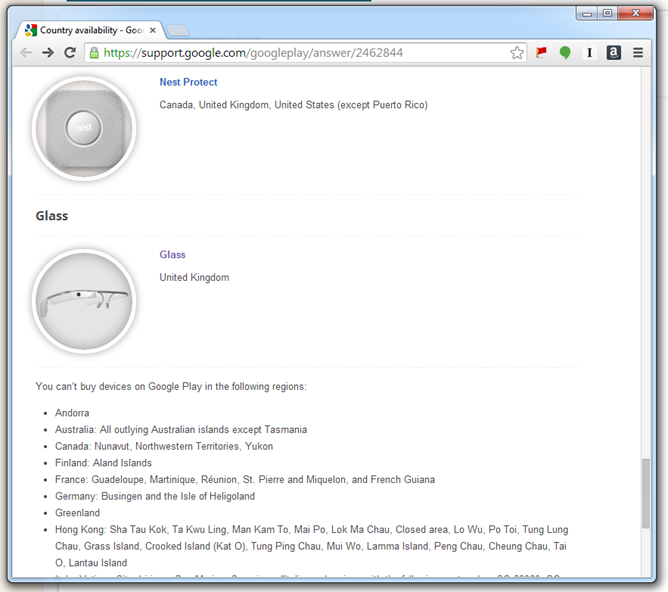 Could this be a premature I/O announcement? Might the UK be the first non-US country to see availability of Glass? It would make sense, I suppose - we've seen support for UK English in previous Glass teardowns, among other countries. One of the big questions, of course, will be whether or not Glass will retain its hefty price tag, or if a wider international release will see the cost drop. Either way, said release appears to be nearing.

Google was contacted for comment on this story, but at the time of publication had not responded to the request.