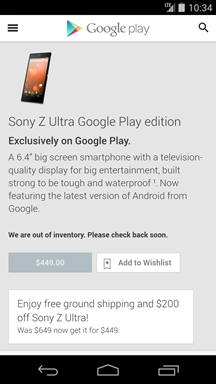 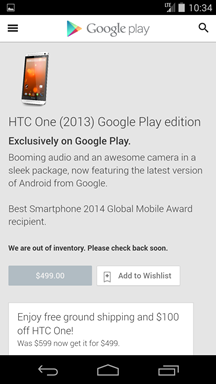 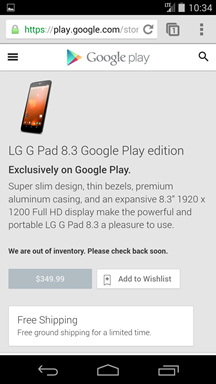 If this were a temporary situation, I'd say it's only so for the G Pad 8.3 since that device is still fairly young, being not-quite 8 months old. That said, this is most likely the end of the road for the Z Ultra and HTC One M7. Both of those devices recently got a permanent price cut, and in the world of retail, that normally means they're trying to get rid of remaining stock. Unfortunately, since demand for Google Play Edition devices, by design, isn't going to be all that high, it makes a lot of business sense to just do one manufacturing run and when they're gone, they're gone. This is purely speculation, of course, since there has been no official announcement from Google or any of the OEMs in question, but if you want one of these devices, I'd start checking the used marketplace.

Update: The Galaxy S4 GPE is now out of stock as well, leaving only the HTC One M8 and Moto G available for purchase as of right now. While I'm only speculating at this point, the phone may have been cleared of stock to make way for a Galaxy S5 GPE, which is rumored to be the SM-G900FG device that has been spotted in Bluetooth certifications.

Amazon Will Give Developers Up To $15,000 In Amazon Coins To Entice Users If They Update Apps ...