There are a lot of Bluetooth transceivers out there, but Motorola's newest product, the Moto Stream, undoubtedly tops them all for looks. It's just kind of mesmerizing.

But is it worth the $50 price tag? I ordered one to find out, though admittedly I did so only after finding it on sale for half off using a now-expired coupon code, bringing the price down to just over $30 shipped. At that price, I'd say the Stream is totally worth it - it's really neat to look at, easy to get up and running, and has a few noteworthy features that make it stand out. At $50? I'm a little less sure.

What does the Steam do? It acts as a Bluetooth receiver (technically, transceiver) that pumps out analog audio to any stereo (really, anything with a 3.5mm or set of RCA jacks). Just think of it as a Bluetooth audio translator - it bridges the gap between your smartphone's digital audio streaming and your stereo's analog inputs. 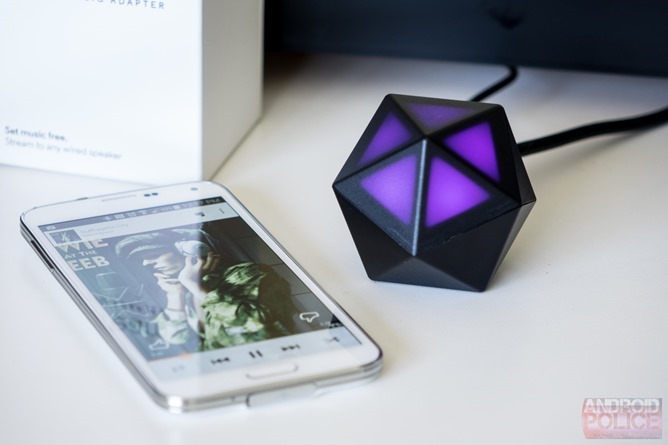 Let's break down the key features of the Stream.

So, unlike the language on Motorola's site and the Stream's box would suggest (it explicitly says wall charger, which does imply a battery!), this thing is tethered to an outlet. The included USB cable is quite long, though, and because it works with pretty much any sufficient USB power source (0.5A / 5V minimum input), it's still relatively portable, because who doesn't have a microUSB cable these days? 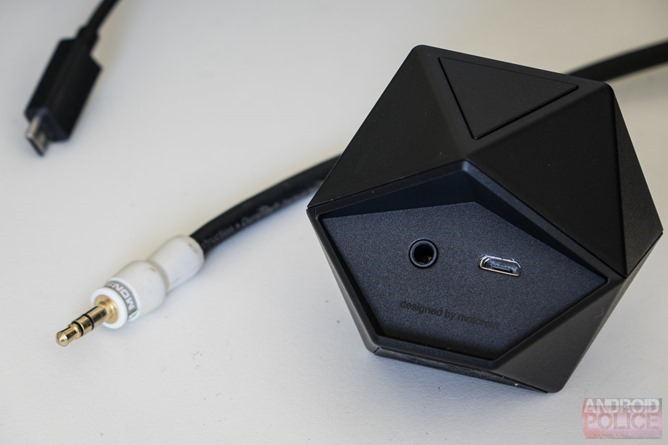 How's it work? Simple - just plug it in, the cube lights up, and either pair via the NFC chip on the top of the cube or simply locate it with a Bluetooth scan. From there, you'll see one of the five lighted faces of the Stream illuminate, and as you connect more devices simultaneously, each other face will light up in a different color to show you how many devices are connected. Hit play on a song, and this happens:

The color of the pulsating lights corresponds to the color assigned to the device which is sending the sound, in this case, blue being a Galaxy S5, purple being my iPad. There's a button on the top of the Stream, and you're probably wondering what it does. One thing, and one thing only: turning the Stream on and off. Tapping it doesn't act as a play / pause control, either. Hold it, though, and the Stream will go to sleep and make a sound indicating it's powering down. Why is this necessary? Why not just turn off passively after a few minutes? If you own a Bluetooth-enabled speaker without any kind of pairing protection, you'll know the answer to these questions, especially if you live in an apartment or have children: people like to connect to Bluetooth things they don't own, and sometimes then play music very loudly through them. It has happened to me. 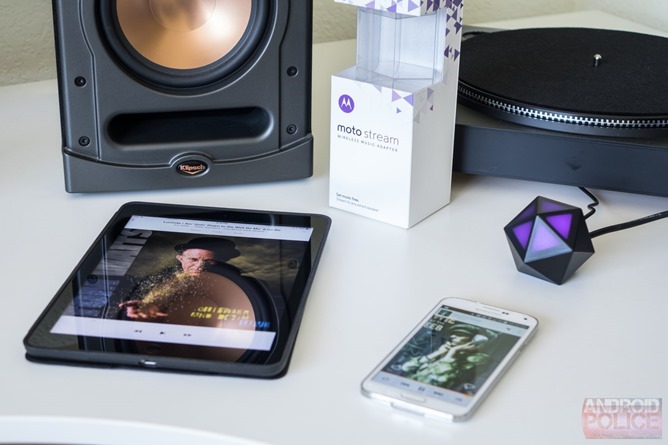 Because the Stream supports up to five simultaneous Bluetooth connections, Motorola has decided to brand the fact that you can "bump" the currently-playing song by starting another song on a different device. They call it Heist Mode. Except it's not a mode - it's just always there, and cannot be disabled. So yes, someone living next to you could totally jack your Stream at any time it's on and start blasting "Barbie Girl" for no good reason. This, by the way, is what "heisting" looks like when it happens on the Stream:

I really do love the visual aspect of the Stream, and just the way it looks in general. It's so dang cool.

Bluetooth Class 1 support means the Stream has a potentially much greater range than your average Bluetooth audio accessory, with Motorola claiming up to 300' max. Granted, that number is probably referring to a totally open space. In clear weather. On a Thursday. At 2PM. When Jupiter and Mars are perfectly aligned.

Still, testing it in my apartment, I took both my iPad and Galaxy S5 downstairs, into the bedroom, put them in the closet, closed the closet, and closed the bedroom door, and both still streamed perfectly with no distortion or skipping. This Class 1 Bluetooth stuff is serious business.

As far as audio quality, it's very good, but only as good as something as small and cheap as the Stream is going to get you. That's to say, this isn't a high-end DAC / amp combo, it's a relatively inexpensive (in audio world terms) tool to get sound from your phone to your stereo over the air. It's perfectly suitable for everyday listening, and I imagine it could be pretty awesome for tablets if you want to kick back and watch a movie or some YouTube. I tested for latency, by the way, and found that neither the GS5 nor the iPad experienced any audio / video sync issues using the Stream in both Netflix and YouTube.

So, what's the bottom line? At $50, the Stream isn't the cheapest Bluetooth transceiver on the market, but it is one of the most feature-rich. Sure, it doesn't support fancy extras like transmit functionality, optical audio, or multiple output jacks, but for the vast majority of people, it does the vast majority of what you want a Bluetooth audio transceiver to do. I'd say that if the looks don't win you over, maybe browse Amazon for a cheaper alternative, but if those lights are as mesmerizing to you as they are to me (not to mention the kickass range of this little thing), pull the trigger. (Link to buy) 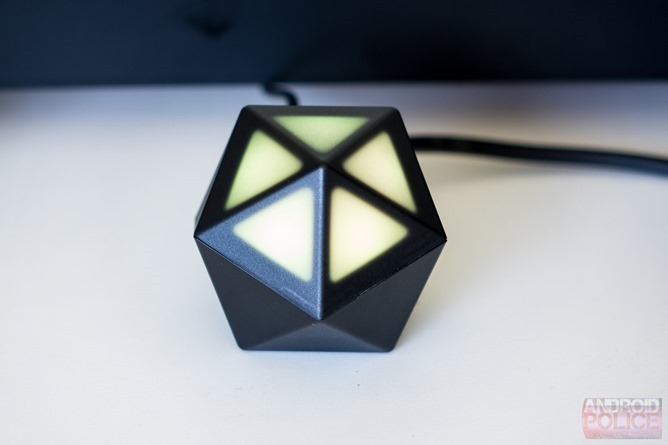