If you're rocking the Verizon version of Samsung's Galaxy S4 Mini, check your notification bar: you may have an over-the-air update waiting for you. According to this Verizon support document, the KitKat update is heading out for the Big Red model of the S4 Mini. KOT49H.I435VRUBND5 upgrades the phone to Android 4.4.2, throwing in Samsung's minor additions to TouchWiz as well. The update also has a smattering of adjusted apps and bug fixes. 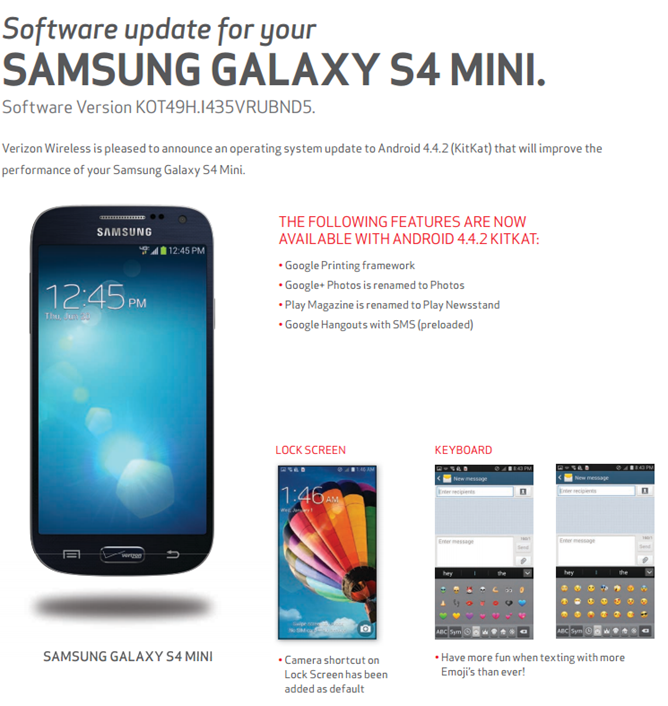 According to Verizon, in addition to all the goodies that KitKat includes, the update adds Verizon Cloud and Emergency Alerts as pre-installed apps, and updates Samsung's KNOX encryption system to 2.0. An automatic accessibility lock is available in the settings menu, and the Samsung SMS app now has font size options. Bug fixes include Wi-Fi stability and less intrusive notifications, fixes for Backup Assistant Plus, and a force-close fix for Google Voice Search. Oh, and the keyboard has more Emoji now. Yay.

You know the drill: head to the Settings>About Phone menu to check for a new update, and don't be surprised if it isn't there, since these things tend to go out in waves. It should be available to all Verizon S4 Mini owners in the next week or so. If you happen to be rooted, expect the update to fail.

[Yes, Really] Investors Put Off That HTC Didn't Give Out Over $1 Million In Free Phones To ...