It would seem Google's added a new musical feature to Search queries on Android, with searches for specific musical artists now giving direct links to your installed music apps (including Spotify, Play Music, TuneIn, YouTube, iHeartRadio, and Rdio). What actually happens when you tap one of the shortcuts, shown below, seems to vary significantly depending on the app. 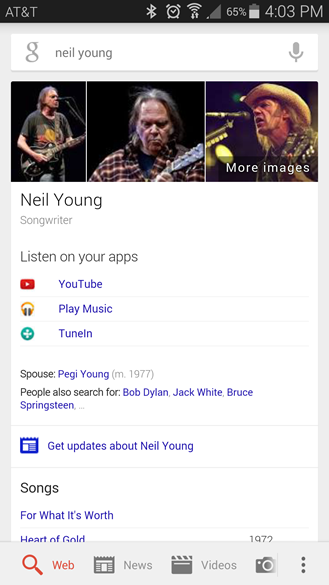 For Play Music, you'll be sent to the artist's page, whereas for YouTube, you'll head to the topic for that artist. I didn't test any other services, so it's hard to know exactly what'll happen in, say, Spotify. Interestingly, the feature does not yet work with albums or song titles that I can tell, so its usefulness is fairly limited at this time.

Also, those tiny touch targets are very un-Google. Who thought those would be a good idea? Anyway, this should be live for US users right now, according to a tweet from Google.

Sprint Starting Deployment Of Android 4.4.3 For The Moto X Google Will Add A 'Factory Reset Protection Solution' To The Next Version Of Android, AKA A ...