Come on, you can't be serious. This has to be a joke, right? No? Fleksy is actually making a tiny software keyboard for the Gear 2? Okay then.

Fleksy claims that its Messenger keyboard is the first one to be featured on the Gear 2, and we're not going to argue. Touching on the inevitable difficulty of typing on a screen 1.6 inches across, the press release says that "Fleksy’s sleek design and unparalleled prediction engine makes it virtually effortless." If you say so. At present the virtual keyboard is only for replying to text messages... not that there's much else you would want to type out like that. 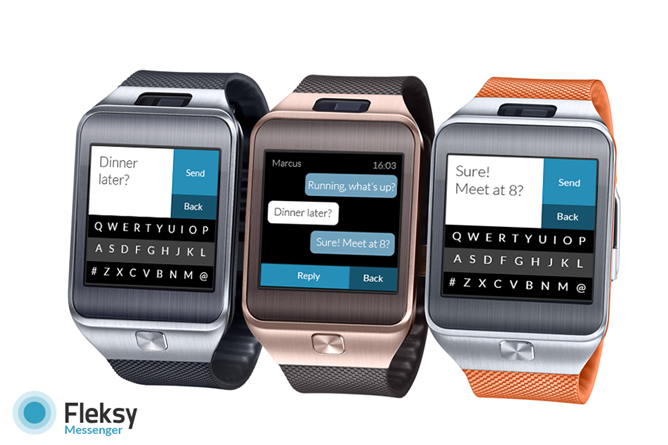 I can't help but be reminded of the ill-fated Fossil Wrist PDA, a PalmOS-powered "smartwatch" released way back in 2003. It also had a teeny-tiny screen that was applied for perhaps more utility than it warranted, and you could even type on it, with the included teeny-tiny stylus that slid into a hidden compartment on the clasp. Arguably, the stylus approach made more sense on the small screen, since PalmOS supported gesture-based Graffiti typing.

Fleksy Messenger is available on the Samsung App Store. For more semi-hilarious attempts at watch typing, check out Minuum.

SAN FRANCISCO — June 18, 2014 — Fleksy, the award-winning touchscreen keyboard company, released a messaging app today for the Samsung Gear 2 Smartwatch. Fleksy is the world’s leading solution for quick and accurate typing, and its patent pending technology has been highly anticipated by the world of wearable technology.

Now with the Fleksy Messenger app, Gear users can use Fleksy’s unmatched technology to send SMS messages straight from their wrists, forever improving their typing experience. The Fleksy app is the first keyboard to integrate with the Samsung Gear 2, allowing users to access previous conversation threads and contacts, receive SMS messages and reply to them straight from their wrist. The Fleksy app syncs with the user’s Smartphone, integrating all information from both devices—all using award-winning technology that makes typing on small devices a breeze.

Founder and COO of Fleksy, Ioannis Verdelis said: “We are excited to have worked with the support of the Samsung Gear team to bring an awesome new app to the Gear ecosystem and Tizen OS. Our unique technology is redefining what wearable technology devices are capable of, and how users will engage with their Smartwatches.”

Fleksy’s patent pending technology is uniquely positioned for wearable devices, designed to help Smartwatch users more easily and accurately reply to text messages. Typing within such a small area can be a challenge, but Fleksy’s sleek design and unparalleled prediction engine makes it virtually effortless. This is one of the first steps in the direction of enabling Fleksy on all smart devices—regardless of their size, shape, and form factor.

The Fleksy Messenger App is available for free download today from Samsung Apps.

“It’s exciting to be expanding to devices like the Samsung Gear, and we’re confident that Fleksy will continue to grow as the leading keyboard for smart and connected devices. We want every owner of a smart device—Smartwatches included—to have access to Fleksy, and to enjoy a happy typing experience.” said Kosta Eleftheriou, Founder and CEO of Fleksy.

Samsung Introduces Korea To The Galaxy S5 LTE-A, The Phone's Impressive QHD Display, And Its ...