Update: Here's a video of the full press conference.

We've been hearing about Amazon's potential smartphone for what seems like years, but today it's finally real. At a super-exclusive Amazon event, Jeff Bezos talked about Prime, Kindles, FireTV, customers, some other stuff, and took wraps off of the company's first go at a phone. It is, as you may have guessed, an interesting one. It's packing some rather unique features, as well as top-notch hardware: 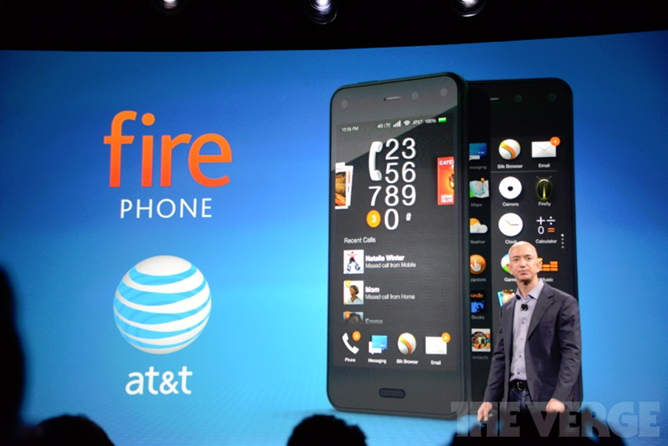 This phone features all the goodies you'd expect from an Amazon device – X-Ray, Second Screen, Prime streaming content, Whispersync, Mayday, and the like. It's an Amazon phone designed for Amazon content. 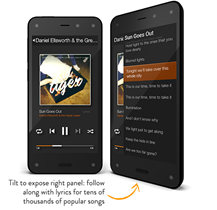 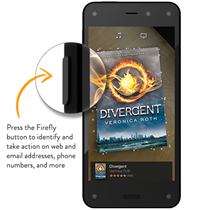 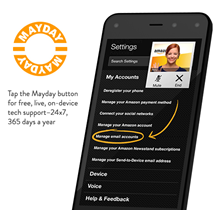 Fire Phone also has an interesting feature called Firefly: this is essentially Google Goggles, Sound Hound, and the like all in one. It uses the camera to identify items, keep track of them, and then let you purchase them (from Amazon, of course). Same goes for music. Third-party apps can tap into this feature, as well, to create radio stations based on these tracks.

But wait, there's more: it also works with films and shows. The camera can detect what you're watching and provides X-Ray data on not just the show, but the very episode. And, of course, lets you buy it.

It can recognize over 100 million items, and will even provide Wikipedia articles for brands and the like. It recognizes phone numbers and is smart enough to know when it registers a number incorrectly (due to glare and whatnot). Crazy.

Amazon is making available an SDK for Firefly, which will allow third-party app creators to incorporate it into their apps.

Then there's Fire Phone's interface. Bezos calls it "dynamic perspective," and certain elements of the OS and some applications basically move with you. According to The Verge, this feature updates 60 times per second to keep things sharp and crisp.

Since Amazon created Fire Phone to basically be used with one-hand, a lot of the navigation can be handled by simply tilting, flicking, or otherwise moving the device. Sounds like this could get pretty confusing, so hopefully there's a way to disable it for users who aren't keen on the feature.

Then there are the Fire Phone's four front facing cameras. Basically these are needed for all the head-tracking stuff packed into the software, which requires two cameras at all times. There are four so any two should be accessible at all times. Also, each one has its own infrared sensor for tracking in the total darkness. In.Freakin.Sane.

Amazon apparently spent quite a bit of time learning how to track heads, and now its software is so good it can tell the difference between a real head and a fake (or dead) one. That's awesome...but I'm still wondering why my phone needs to know where my head is at all times.

There seem to be lots of little features here and there in FireOS for Fire Phone, as well, but we'll take a closer look at those things in the full review.

Any way, that's Fire Phone...or at least most of it. It will be available exclusively on AT&T for $199 with a two-year contract (or $27/month on NEXT), or $649 for 32GB/$750 for 64GB. It'll be available on July 25th, but is available for pre-order now. Oh, and if you buy it, it comes with a full year of Prime at no added cost. If you're already a Prime member, it'll extend your membership by a year. So you're getting free Prime either way.

Images via The Verge

Samsung Is Updating The Gear 2, Gear 2 Neo, And Gear Fit In The US With Improved Pedometer ...