I'm going to tell you a story. Don't worry, it's rather short, and it will be very easy to follow. Early this year, Google bought Nest, a company that makes cool thermostats, for $3.2 billion. A few months later, Google started to sell said thermostats in the Play Store. Now those thermostats are being joined by a nifty smoke and carbon monoxide alarm called Nest Protect. 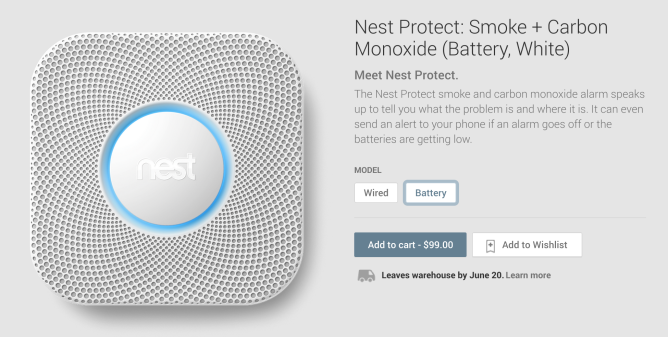 As a smoke alarm, Nest Protect isn't quite as exciting as a thermostat. Nevertheless, it does have a few nifty features under its belt. The alarm speaks in a human voice that can tell you what it's detecting and where in the house the danger is. It can also shoot an alert to your smartphone, so you don't need to be home to know when it's going off. And if you happen to own a Nest thermostat, the two devices can communicate with one another.

The store is currently only selling Nest Protect to residents of Canada, the UK, and the US (excluding Puerto Rico). It goes for $99.99, the same price available elsewhere, and comes in two variants: wired or battery-powered. Either one you purchase won't leave the warehouse until June 20th.