While the majority of Nexus and GPE devices have received their Android 4.4.3 OTAs relatively quickly, the rollout for certain other devices has certainly been... unusual. We still haven't heard anything about the 2013 Nexus 7 LTE, the LG G Pad 8.3 GPE, or the Moto G GPE, and until today, the OTA for the 2012 Nexus 7 Wi-Fi (I've been waiting for it to post both Wi-Fi and Wi-Fi+3G links together).

As they say, better late than never, but I'm sure owners of the abovementioned phones and tablets are not thrilled, especially those with Nexus 7s LTE that have received neither factory images nor OTAs. But that's a discussion topic for some other time - right now, we have the 2012 Nexus 7 OTAs to talk about.

If you haven't gotten the OTA notification yet yourself and are itching for a taste of 4.4.3, the manual installation process should do the trick. Just follow the steps in our guide for an earlier update, and you'll be set up with Android 4.4.3 in no time. You don't need root, custom recoveries, or bootloader unlocks to get this done.

What's new: To get a better idea of what's new in Android 4.4.3, hit up this post and check out the updated Dialer. 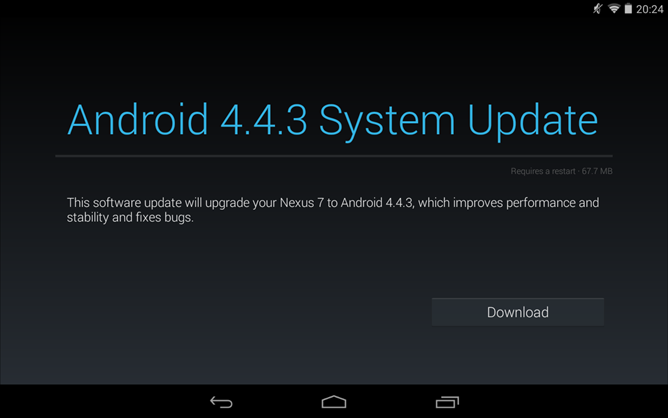 Sunrise Updated To Version 1.1.0 With Integration For Tripit, Evernote, Github, And More