Sony announced at the Symposium on VLSI Technology that it is trying to improve the functionality and light capture of CMOS sensors by bending them, using - get ready - a proprietary "bending machine." So far, their efforts sound successful. The manufacturer has created a pair of curved CMOS sensors, one sized for cameras (43mm) and one for mobile devices (11mm), that they say have improved sensitivity 1.4x at the center of the sensor, and 2x at the edges. 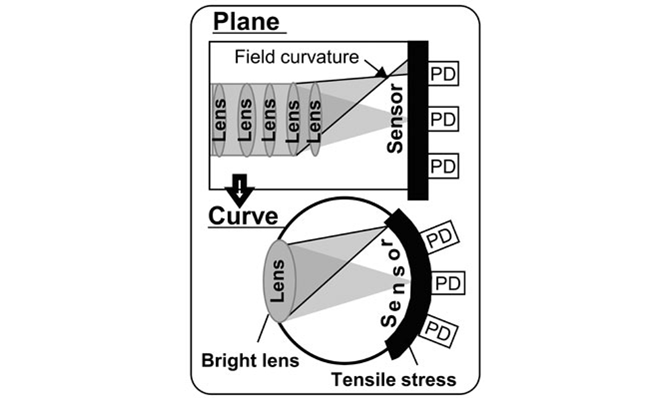 A rounded sensor, according to Sony's Kazuichiro Itonaga (device manager with Sony's R&D platform in Atsugi-shi, Japan), is uniquely advantaged. Because of its curvature, the sensor can be paired with a flatter lens, while actually making gains in light sensitivity - light rays are able to hit the edges of the sensor at a straight angle, rather than an oblique one. So called "dark current" is also reduced, making for lower noise in low-light shooting.

Dark current, by the way, is the electricity running through sensor pixels when they aren't actually active, which is increased when the rest of the pixels are pumped up to capture what little light there is in dark conditions.

Sony apparently showed off an image captured with the new sensor and flattened lens system at the symposium, but comparisons to typical CMOS sensors remain to be seen. The bottom line here is that, while Sony isn't the first to create a curved CMOS sensor, they are already positioned to create them for mobile devices, which will mean better low-light shooting in a space that so desperately needs it.

[New Game] Supercell's Popular Boom Beach Is Now Available On The Play Store, But Only In ...