Listen up, UK readers: if you're rocking an HTC One from 2013, and you got it from O2 or Three, check your notification bar for an update. According to this HTC support page, a fresh, steaming copy of Sense 6 is headed your way. The unlocked GSM model of the One M7 should also be getting the update. (Apparently the unlocked update is going out by country, since the US unlocked model was already updated.) Vodafone UK and EE users will have to wait. 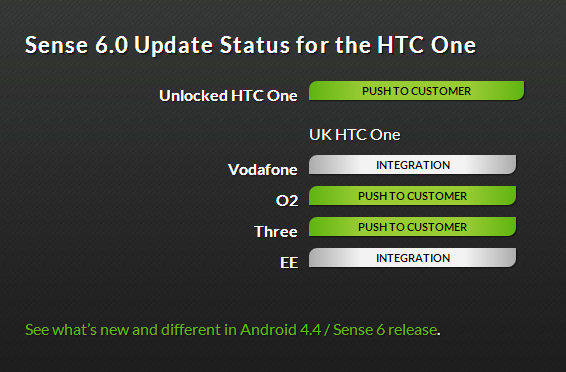 Sense 6 is the build of HTC's proprietary interface that came with the new One M8 model and later phones. It's mostly cosmetic, with stylish "flat" icons, widgets, and backgrounds, but there are some functional upgrades as well. HTC's Blinkfeed widget/service has a continuous scroll layout instead of the paginated look, and more of HTC's apps have been separated for Play Store updates. For a deeper look at the changes in Sense 6 and HTC's Android 4.4 build, check out our HTC One M8 review.

Most of the One M7 models in the United States have been upgraded to Sense 6 already, which is a little strange - normally non-US carriers get updates out sooner thanks to lighter software customizations. We're still waiting to hear about Sense 6 updates for carriers in other countries.