A couple of months ago, we posted one of our early Google Search/Now rumors, and it was something of a long range rumor compared to others. While things like parking reminders, proper timer management, and bill pay reminders have already seen their public release, the ability to set contact-based reminders ("remind me when I'm with this person"), hasn't come forward yet. But it will likely appear very soon with a new feature in Android called Nearby, which will allow new interactions between you and nearby people, places, and things.

We've received information indicating that Nearby will come with an upcoming Google Play Services update. While we still caution readers that anything related to a leak can change, we are not treating this as a rumor, as our information is reliable and complete enough to inspire full confidence that this functionality will be revealed (in an official capacity) soon.

Before we get started, here's the copy from the Nearby onboarding screen, which gives a nice overview of what we'll be discussing.

Nearby lets you connect, share, and do more with people, places, and things near you.

When Nearby is turned on for your account, Google can periodically turn on the mic, Wi-Fi, Bluetooth, and similar features on all your current and future devices. Google+ and other Google services need this access to help you connect, share, and more.

When you turn on Nearby, you're also turning on Location History for your account and Location Reporting for this device. Google needs these services to periodically store your location data for use by Nearby, other Google services, and more.

You'd be forgiven for not registering the full impact of Nearby from that snippet. The key takeaway from this is that Nearby will allow enabled devices, with extreme precision, to know when they are near each other, and interact according to the context.

Remember when Google bought Bump? The service used the bumping motion as well as location data to know when two devices wanted to interact. Google also acquired SlickLogin in February, which can use audio, Bluetooth, and WiFi to authenticate. Nearby would wrap up all these techniques without you even touching your device. To protect privacy, the information gathered from these various sources on your device would likely travel to Google, and be matched with others' information there, with only the acknowledgement of proximity being revealed to other devices.

Users, according to our information, will also be able to choose who (and presumably what) they are visible to. This will limit the ways that Nearby can automatically interact on a user's behalf.

While it's still early in its life cycle, and settings don't appear to be fully built out yet, it's easy to imagine Nearby coming in handy for extremely targeted Wallet offers, reminders, or other location-based interactions, but the important part here is that a user wouldn't need to interact with their phone or tablet to let other devices (be they mobile or otherwise) know they are around, and switching on Nearby once would allow the functionality to work with all of a user's devices.

This would open up the possibility of automated functionality in tons of spaces beyond the commercial world, from home automation to everyday user-to-user interaction, to the interaction between your own devices. This is especially interesting in light of Apple's recent announcement of Continuity, an iOS and OS X feature that allows Apple-made devices to interact with each other in really smart ways automatically, based on proximity.

Readers may remember "Easy Unlock," an unfinished Chrome OS feature that would let users unlock their Chromebook simply by being near it with their phone. It's unclear whether that specific function is related, but it would certainly make sense. There's also a hint at automated proximity-based functionality in the Android Wear promo video, in which a user opens their garage door by simply saying "Ok Google, open garage."

Typically, we choose not to post source images for stories like these, since early prototypes and explorations can include identifying information. This time, though, we are making an exception - the shots below are actual screenshots, not our mockups. The first set of shots shows entry to Nearby settings from Google Settings. Nearby is under the "Location" item that already exists in Google Settings. The initial screen will give the user some introduction to what Nearby is and does, and the option to turn it on, though for obvious reasons, a data connection is required to switch it on. 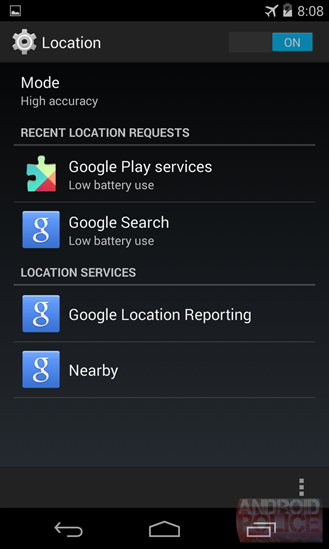 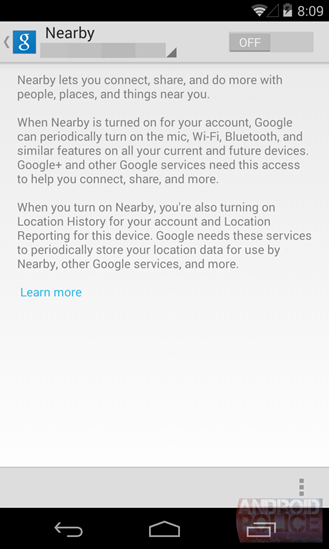 Once the user does flip the switch, there's not a whole lot to see. According to our information, the settings here will include items like "visibility," wherein a user can monitor and adjust the list of other people they are visible to. Individual settings for other services using Nearby would likely also populate this list, once everything is hooked up. It isn't surprising to see an empty tray here, since apps besides Play Services would need to be updated to actually hook into this functionality and it doesn't appear any apps have this capability yet.

For those wondering, the "Learn more" link (here) seen above is not live yet - it just redirects to Google's main support page. 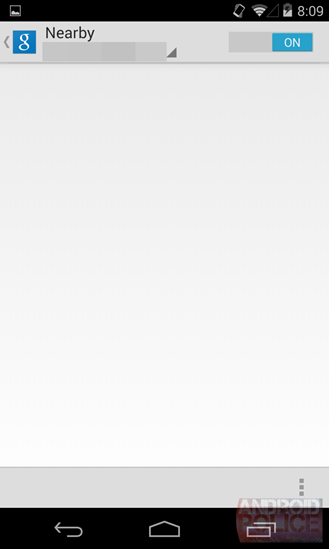 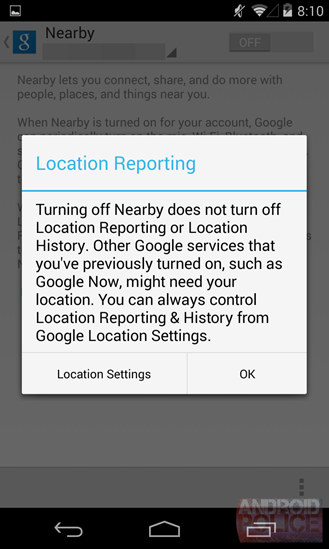 It's early, but Nearby is definitely a functionality to keep an eye out for. Besides the obvious applications like the previously rumored contact-based reminders, the feature could have huge potential for other areas. We can't be certain whether this will be an I/O unveiling, but here's hoping we hear something official soon.