Bluetooth stereo receivers, even one with batteries, even ones with transmit and receive functionality, ones with extra-powerful antennas, ones with optical audio support, ones with NFC, and ones with apt-X support have been around for a good, long while.

But what about a Bluetooth audio receiver that lights up with all kinds of funky colors and is shaped like an Icosahedron? Yeah, I know I've got your attention now, and for $50, Motorola will make all your psychedelic geometric high-fidelic near field Bluetooth dreams come true. That's Motorola Stream.

Now, if you're not really big into the Bluetooth audio scene, here's what you need to know about the Stream compared to its competitors. First, it appears to have an internal battery (the wall wart is called a USB charger, not an AC adapter), so a constant AC connection isn't required (many BT receivers don't have batteries), it has NFC for quick pairing, and it can be controlled by up to five devices (most receivers support five A2DP connections, too, though). The only audio-out option is 3.5mm, and a 3.5mm to RCA splitter is included (3.5mm to 3.5mm is not included). The Stream is only a Bluetooth receiver, not a transmitter - meaning it is only capable of receiving audio and sending it out through the 3.5mm jack. (BT transmitter devices allow you to broadcast audio to other receivers.) 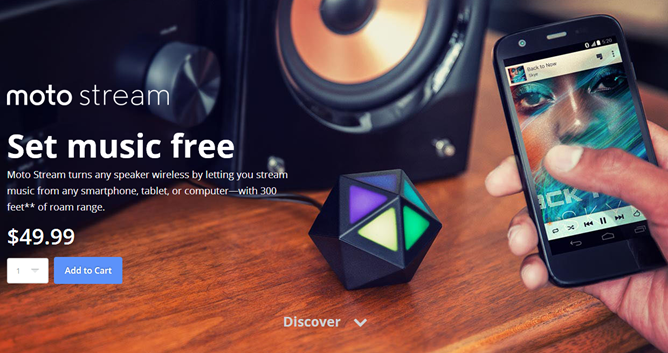 Also, it lights up and is shaped funny.

At $50, the Stream isn't exactly great value for money, nor does it appear to support the increasingly requisite apt-X high-fidelity Bluetooth audio wrapper, and Motorola doesn't expound on battery life at all. In fact, unless you're set on the light-up functionality, it's really not special at all in this product category, and is arguably overpriced for what it is. Motorola's claim of 300' range is also ridiculously optimistic, as that theoretical max for Bluetooth 3.0 depends on an open line of sight with no ambient interference and the alignment of several stars whose names can only be pronounced by the many tongues of our dark lord Cthulu.

Anyway, you can buy it right here.