Unless you blacked out all of the news from yesterday to avoid a deluge of stories about what has been happening in Cupertino, you probably caught wind that there's a brand new update to Android. Whether you're manually installing the latest OTA or going all out with the factory images, you might be interested to know what is actually different. Thanks to Al Sutton, we've got a brand new changelog compiled from the list of code commits submitted to the Android Open Source Project (AOSP). It covers just the bug fixes, tweaks, and adjustments from 4.4.2 (KOT49H) through to 4.4.3 (KTU84L). With 7,454 total changes, this update is a monster! 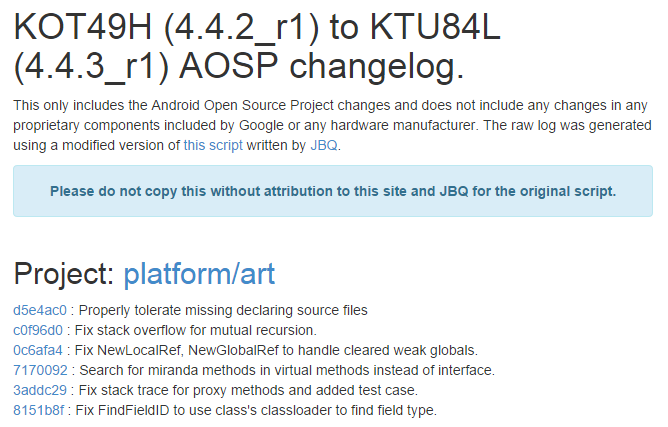 Hidden within the massive list is an assortment of both expected and unexpected treats. We were all pleasantly surprised to see the rumors of a partially redesigned Dialer app were true. Naturally, there are also some performance improvements and fixes to issues throughout the recently added Chromium built-in browser, ART, Dalvik, numerous apps, and so much more.

After a quick skim through the last several months of Bug Watch posts, it looks like quite a few of them have been taken care of with this update. We no longer have to worry about losing Bluetooth functionality from overexposure to BLE devices (aefcb18) or some of the other less specific Bluetooth issues, popping sounds in flac audio files (9aad9a2), semi-permanent death of background services (c174288), or bad VPN routing (797ec70).

There are also a few device specific changes, including a fix for the low volume on wired headsets (0bf5c52). Unfortunately, most of the major fixes to the Nexus lineup came in the form of new binary blobs with undocumented changes, so we won't know if the Nexus 5 is finally free of its issues with poor audio quality or the poorly handled problem with missed calls and text messages. It may even be possible that we've finally got a fix for the strange 5GHz Wi-Fi connection problems.

If you're curious about any particular issue that's been plaguing you, or you just feel like skimming more than 70,000 fairly cryptic words, hit the link below to see the full list!