People seem to kind of like the Asus Transformer series with the optional keyboard docks – it kind of makes sense in a limited way. The PadFone has been a tougher sell, but what if you mashed up those products? Surely that would be the product everyone has been waiting for. Behold, the Transformer Book V, which really is all the things.

This is a (kind of) single modular device that consists of a phone with a brain powered by Intel, a 12.5-inch tablet screen dock, and a keyboard dock with separate hardware. You just stuff the phone in the tablet dock to make it into a tablet, then stuff the tablet into the keyboard dock to make it a laptop. It's the Turducken of consumer electronics. In tablet and laptop mode it can switch between Android and Windows, but it appears the phone is Android-only (which would make sense).

The Transformer V is powered by an Intel Moorefield chip in the phone and has an Intel Core CPU in the dock section. So, it actually seems to be using the phone part to power tablet mode, but laptop mode is all about the smarts in the keyboard dock. There are 2GB of RAM in the phone/tablet and 4GB in the laptop section. The laptop also gets 128GB of storage, while the phone and tablet have to make do with 64GB. 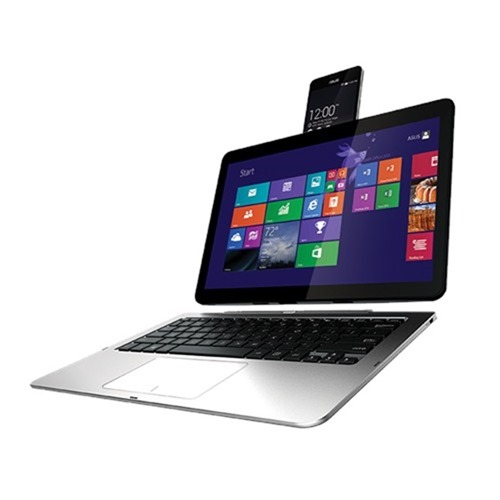 It wasn't made entirely clear from the PR, but I think you could take the phone out of the tablet and use it as an Android device while running Windows on the tablet screen. We'll have to wait for more details on that whenever Asus gets around to elaborating, hopefully we'll also find out when and how much.