Rumors are flying about Samsung's plans for the virtual reality headset market. Just a week after Engadget's last unconfirmed report on Samsung's VR device, there's a new post that sheds quite a lot more light on the subject. First of all, Samsung and Oculus VR (makers of the Oculus Rift and recently acquired by Facebook) are sharing technology to improve each other's products. And secondly, Samsung's device uses a dock for your phone, which then becomes the primary display for the device.

If that seems a little odd do you, you're not alone. Assuming that this really is the direction that Samsung is going, the "headset" would be more a of a head-mounted dock, albeit one with some extra hardware and software tricks thrown in. According to the report, the user's phone plugs into the headset with the screen facing the user's eyes, and the headset uses a discrete accelerometer for gaming and interface purposes, saving resources on the phone itself. Samsung is reportedly using an early version of Oculus VR's mobile-specific software development kit - if true, that means that the Korean company has exclusive use of it, at least so far. 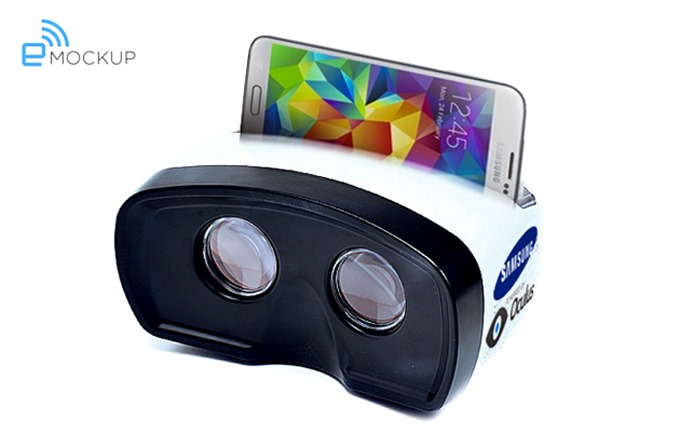 Engadget's mockup of Samsung's slot-in design. The thumbnail above is from Gizmodo's hands-on of a hat that holds your phone in a similar manner.

This somewhat strange layout would include Android hardware buttons (home/back/recent) on the headset itself, and it would be possible to use the phone's rear-facing camera as a pass-through, allowing the user to quickly see their surroundings without taking off the vision-obscuring headset. It could even open up some interesting uses for augmented reality.

The idea of a slot-in design does make some sense. It would allow Samsung to sell the headset as an add-on, and at a much, much lower retail price than a headset with a dedicated screen, CPU, and GPU. Engadget says that the design is still in the early stages, using variants of the Galaxy S4 as development mules. Future versions would probably use the S5, or something even newer (possibly with a screen with an even higher resolution). Previous reports indicated a focus on Android-powered gaming and media - the current device is said to use motion detection and head-tracking to navigate the interface, but conventional buttons, a separate gamepad, or voice control are all possible. Games for the device are currently in development.

So what is Oculus Rift getting out of this? Screens. The report says that Samsung is giving the Facebook subsidiary access to extremely small and high-resolution OLED screens, even better than the ones currently featured in the second-generation development kit hardware. Since Oculus is the current leader in VR gaming software (in so much as it's possible to tell), and Samsung is one of the world's most prolific and sophisticated electronic screen manufacturers, it seems like a fair trade.

None of this information can be independently verified, and both Oculus and Samsung are tight-lipped on the subject, so treat it all as rumor for the time being. And when or if a Samsung headset comes to market, it could include all of these features or none. Or it could simply die in Samsung's R&D department, as so many off-the-wall ideas tend to.

Future Versions Of Android Are Likely To Block System Write Access Outside Of Recovery, Even To ...