Wow, it's been over three years since we wrote about the official app for Digitally Imported Radio, or as it's known in your URL bar, DI.FM. (Fare thee well, "Android Market.") This app lets you access 65 finely-tuned streaming music stations focusing on electronic music and similar genres. The update to version 1.5 lets you sign in with either Google+ or Facebook. You can still log in with an existing DI account, or create a new one sans social network. 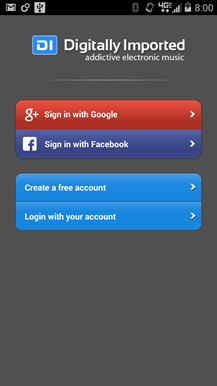 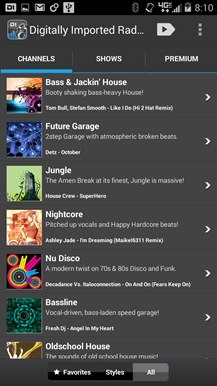 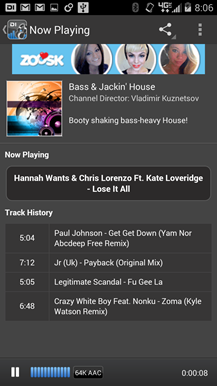 Other changes include visual tweaks, connection improvements for several countries, support for Android devices with Ethernet, and better Bluetooth, power, and security management. While the interface isn't exactly amazing, the update adds Holo-style tabs and a little bit of flair. Note that you can't swipe between them like in some other apps, you'll have to manually tap each tab to switch. (The screenshots on the Play Store have not been updated for the new version - the ones above show the new and improved UI.)

Basic listening is free, but you can upgrade to a premium subscription to get rid of advertisements and listen at higher than 64kbps. Unfortunately the app doesn't support a Google Play subscription - you'll have to pop out to the browser to set up a premium account for $7 a month or $70 a year.