The number of Bluetooth speakers I've looked at in the past year (give or take) is vast. As a result, I feel like I have a good understanding of what's available on the market, as well as what offers the most bang for the buck. As time has gone on, I've started holding each new speaker to a higher level, because the competition is just too stiff not to. Manufacturers absolutely have to one up the other guys if they want to stand out in this saturated market.

The first thing that drew me to the Fugoo wireless speaker is its incredible claim of a forty hour battery life. That's basically a full workweek worth of audio playback, all without a recharge. After researching it a bit more, this speaker sounded better and better – it's fully submersible and has interchangeable action jackets for various activities; it's basically designed to take a beating. I wanted to not only see if it could live up to the hype, but also how it sounded. Features don't mean anything in a BT speaker if the sound is crap.

In short, it didn't disappoint. This is my new favorite ultra-portable Bluetooth speaker. Now, let's talk about why. 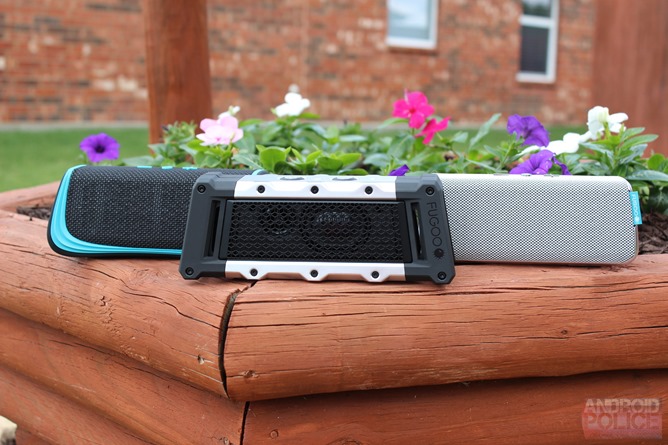 Fresh out of the box, the Fugoo speaker doesn't look like anything special. In fact, it's a pretty regular design. The cool thing, however, is that the look can be changed between three different "jackets" (all sold separately, of course) which are designed for different levels of ruggedness. The speaker core can be purchased with any of the three jackets as the "stock" option, but each one can also be bought separately, so it's easy to get them all. Here's the basic rundown of each one:

While the ability to change the jackets is pretty rad, it can be somewhat of a task – the sturdier the jacket, the more of a pain in the ass it is to change. That's not terrible, of course, because I can't imagine feeling good about the Tough Jacket's ability to protect the core if it just slid into place with ease. Fugoo actually has a pretty nice video demonstrating how to change the jackets:

While that's pretty close to my experience, I will say that removing the Sport jacket is much more difficult in reality than it is in that video. I have a feeling that particular jacket was "well worn," making it much easier to work with. Still, that is how it's done, it may just take a little more time and patience at first, should you choose to go with more than one jacket. Also, a word of caution: do not over-tighten the bottom screws with the Sport or Tough jackets. They'll actually pull the metal eyelets out of the plastic, making it impossible to put the screws back in. That happened on my review unit and I had to use a hammer to get them back in place. So, finger-tight is the key here.

As you can probably imagine, the core itself is also quite sturdy. When jacket-less, it feels like a solid, hefty hunk of a thing – mostly because of that massive battery beneath its flat black housing. It seems very well put together, it just has an overall premium feel about it. It carries an IP67 rating, which means that it's completely dust/mud/dirt-proof, as well as submersible in up to one meter of water for 30 minutes. So yeah, the core is a beast. When changing jackets, it doesn't feel like it needs to be "babied" – just be careful not to touch the actual speakers.

Speaking of, I love the design of the Fugoo when it comes to speaker placement. Both sides are virtually identical, so it doesn't matter which direction the speaker is facing – you always get the same quality of sound. Fugoo actually does a better job of explaining the logic behind the speakers and placement better than I ever could, so I'm just going to steal an excerpt from its website:

Fugoo features six speakers - two tweeters, two woofers, and two passive radiators – with four active drivers. Additionally, Fugoo speakers are tilted upwards at an eight degree angle to ensure that you hear your music the way it was intended to be heard.

Aside from logical speaker placement, the Fugoo also has an omnidirectional mic for calls and/or using Google Now.

Additionally, Fugoo has a handful of cool accessories for the speaker, including a bike [handlebar] mount ($40), strap mount for attaching the speaker to poles, trees, etc. ($30), mult-mount for clipping to speaker to stuff ($30), and a remote control that can be worn around the neck or on the wrist ($50).

If I've said it once, I've said it some 6504 times: a speaker can do all sorts of cool stuff, but sound is the key. It is the one feature that can make or break any speaker.

But the Fugoo sounds awesome for its size, so there's no worrying here. In fact, it easily and readily rivals the former champ of portable Bluetooth speakers, the Ultimate Ears BOOM, save for one detail: volume. The Fugoo basically maxes out at half the volume of the BOOM, which can be a downer in a situation where lots of volume is required. Fortunately, it's quite a bit louder than the Jawbone Jambox, which is essentially useless outdoors. 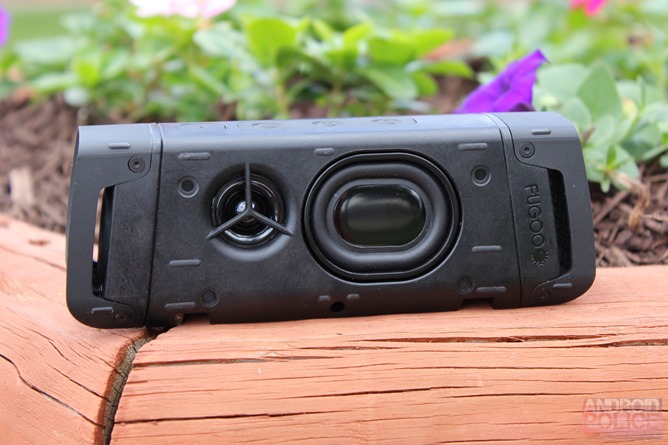 But when it comes to general sound quality, the Fugoo is fantastic. It doesn't have an overwhelming amount of low end (but it's definitely present), and the highs/mids are both very well balanced. Probably better than any other Bluetooth speaker I've heard. I love it.

And then there's the battery life. Holy crap, the battery life. Fugoo claims this speaker can get "up to 40 hours at half volume" – that's a really sensational claim...and one that I'm basically a believer in. I used the Fugoo as my main source of audio for nearly a full workweek. It hit the 35 hour mark before needing to be charged.

Yeah, you read that right: thirty-five hours. Of course, it's going to be less if the volume is maxed in a hot environment (which is the worst-cast scenario), but I'd be willing to say you'd still get around 30 hours on the short side. That is absolutely unprecedented, especially for a speaker of this size.

The one thing I feel like the Fugoo is missing in relation to the battery is a way to double as an external battery. I'd definitely be willing to shave off a few hours of listen time in order to charge my phone up if need be. Alas, tis but a dream. 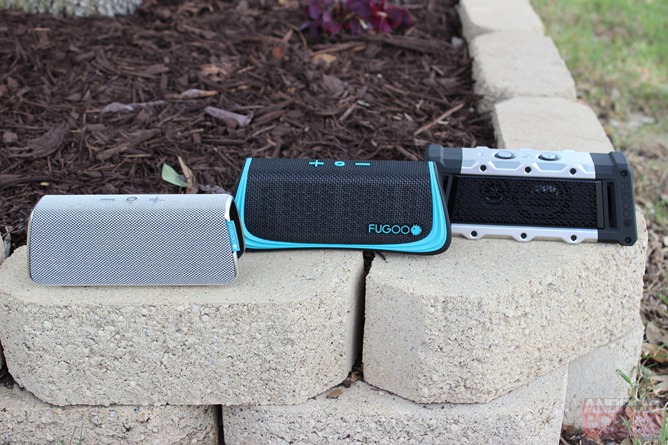 The title of this review is "it's the speaker I'd make if I made speakers," and that's basically 99% accurate. The only things I'd change about the Fugoo is the volume issue and external device charging. While the former could prove itself to be problematic in certain situations, the latter is really just for convenience.

To avoid any confusion, I'll say it plainly: this is one of the best Bluetooth speaker I've ever used, and in my opinion, the best ultra-portable speaker on the market today. The various jackets make it extremely versatile, the IP67 rating makes it durable, the battery lasts basically forever, and – most importantly – it sounds great.

However (you knew that was coming, didn't you?), if you don't need 40 hours of battery life, water/dust resistance isn't an absolute requisite for you, and you don't mind something a little on the larger side, the G-Project G-BOOM is still an excellent choice. Oh, and it's half the price. It's still, hands down, the best value on the market for a Bluetooth speaker. No contest. Ideally, I'd vote for one of each: the Fugoo to throw in your bag and take...wherever, and the G-Boom when you need that extra oomph. But that's $300 just on Bluetooth speakers, which is a little hard to swallow. It's really up to you to decide what's more important to you – you really can't go wrong with either option.

That said, if you're looking for an ultra-portable Bluetooth speaker right now, don't hesitate to grab the Fugoo. It's amazing.

Google Camera Updated To v2.2 With The Return Of Timer, Auto-Cropping, And More [APK Download]