During CES this year, Google and NVIDIA announced partnership with GM, Honda, Audi, and Hyundai in forming the Open Automotive Alliance. The initial announcement was predictably sparse on details, noting only the initiative's core principles, and the goal of bringing Android to cars. After hearing approximately nothing about the effort since then, we now have information that gives us a first look at Google's vision for Android in the Car, referred to internally as Gearhead.

This rumor gets a confidence level of 7/10. We are pretty confident that Google's Android in the Car interface will be functionally close to what we'll look at today, though the actual interface could change drastically. What's also important to note, though, is that manufacturers could still add their own interfaces to Android's car experience. The press release emphasized the roles of "openness, customization and scale," so I'd expect manufacturers to take advantage of that flexibility to customize the software and attempt to differentiate their AitC offerings from others.

The initial announcement of the OAA stated that the goal was to get Android in cars starting in 2014, and half way through the year, with I/O rapidly approaching, the timing is right to announce something related to Android in the Car, but things can change quickly. The information we'll discuss in this post appears to be from earlier this year, so the interface could have already seen refinement.

In the initial announcement, NVIDIA's President and CEO Jen-Hsun Huang called the automobile "the ultimate mobile computer," noting that "with onboard supercomputing chips, futuristic cars of our dreams will no longer be science fiction." Android in the Car (the name we'll use when discussing the project for now, for lack of an official name), in its current state anyway, doesn't look exactly like a science fiction fantasy, but it's clear that a lot of thought is being given to functionality that's actually helpful in the car, based around the kinds of things people do in their car, with Google's special Search sauce applied liberally.

Basically, according to the information available to us, Android in the Car's basic interface will center around four distinct spaces - navigation, music, telephony, and search. We don't have a full explanation for every aspect of the interface, but we can confidently walk through calling and messaging flows, and we know how the music interface will likely look.

One area that remains unclear, and one that's not clarified by our information, is the role of third-party apps. As we'll see below, there's no home button or app drawer in AitC according to our information. We expect third-party apps to exist for Android in the Car, but how users will download or open them remains to be seen. Presumably, though, apps like Spotify or Audible would be right at home in the car, as long as they come with interfaces suitable for driving, meaning minimal physical interaction and minimal on-screen text.

All of that said, let's get to the evidence.

As usual, we won't be posting source images for unreleased software. We do this for a few reasons, source protection being one of them. What we will show you are our own recreations of the interfaces in question using the information available to us, representing things as faithfully as possible.

First, let's take a look at the interface for listening to a song. 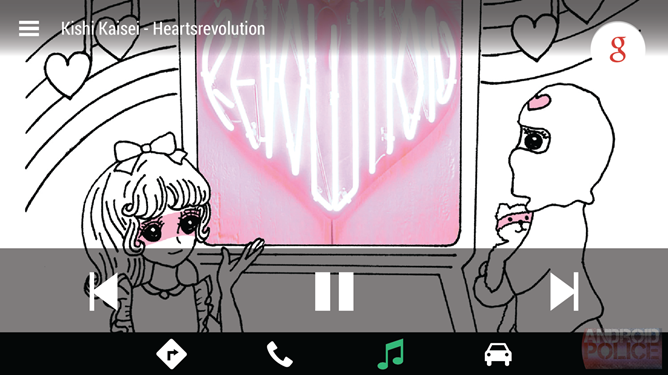 Right away, several things jump out. First, we can see that an app running in the car, when there's a hero image behind it, will have the kind of translucent bar we see in Play Music (and recently the Play Store). We can also see a focus on big, bold, pressable controls (in this case overlaying album art), a system navigation bar that should feel familiar, and of course the Google Search icon we've seen on Android Wear and in several of our other recent leaks. (Note: Hit the play button to start up each of the animations below.)

Animation: Opening the search interface with "Ok Google" from the music interface

From what we can tell, users can enter a dialer interface that would allow them to select a frequent contact or dial a number, but users can also trigger a call using their voice, simply saying "Ok Google, call [contact name]" just like in Google's mobile Search app. Presumably, the user's phone would be connected to the car system via Bluetooth, which is where the call would actually take place.

Animation: Making a phone call from the music interface

Sending a message can also be accomplished through voice commands, where the user would say "send a message," or "send a message to [contact name]." This would trigger Google's usual back-and-forth where the message is dictated, confirmed, and sent.

A current design pattern with Google's voice commands, the blue color indicates a time when Google is talking to the user (internally known as the "voice of Google"). During these times, Google is clarifying with the user what information they want to use - in this example, which contact the user wants to message, and what that message should say. Once that's cleared up, the message can be sent.

Alternately, the user can enter a message in one sweep, saying "Ok Google, send a message to Liam Spradlin - I'm going to be late for the meeting." Google would then wrap that up and send it off.

Animation: Sending a message from the music interface

What's interesting about this interface is that it doesn't show the user his or her message before sending (from what we've seen). Instead, Google reads the message back, and asks if the user would like to send. It appears the user could also manually press send rather than waiting for Google to take over. This is a thoughtful approach if at first it seems backwards - texting and driving is dangerous largely because users manipulate messages and look at their displays while driving. By moving everything to a combination of huge, broad-side-of-a-barn interface elements and spoken interactions, AitC can greatly reduce distraction.

It is also increasingly clear why Google has made voice commands in Search ever more voice-driven, reducing the number of actual taps needed to complete an action all the way to zero in cases like sending a message or setting a reminder through Search.

Voice commands will also trigger navigation and general searches, while the car icon on the far right of the interface will presumably show current information related to the car, with content determined by the car's manufacturer.

There's also evidence that users could see Google Now cards in a separate part of the interface, though the process for reaching that interface isn't exactly clear. It's possible this could tie in with the car icon mentioned above.

While it's ultimately up to the manufacturer how to implement Android in the Car, it's easy to imagine this basic Google-fied interface appearing in at least the first batch of AitC models. That's not to say, however, that what we've just seen will be the final implementation. AitC is still under active development and, as such, can change significantly before release.

[Weekend Poll] How Often Do You Use Google Voice Commands On Your Android Devices?