With today's leak of many of the LG G3's specifications in an internal presentation, it seems all but confirmed at this point that the company's new flagship will sport a 5.5" QHD display. That's big. Like, really big. That's only two tenths of an inch smaller than the display on the Note 3, the current phablet of choice.

This, understandably, has some people hesitant: why is LG going so big with the G3? Will there be a scaled-down version? Will the international variant have a smaller display, maybe? These are questions we can't answer. What we can answer is just how big the G3 is compared to its two biggest rivals - the HTC One M8 and the Samsung Galaxy S5 - because those slides also contained the phone's dimensions. 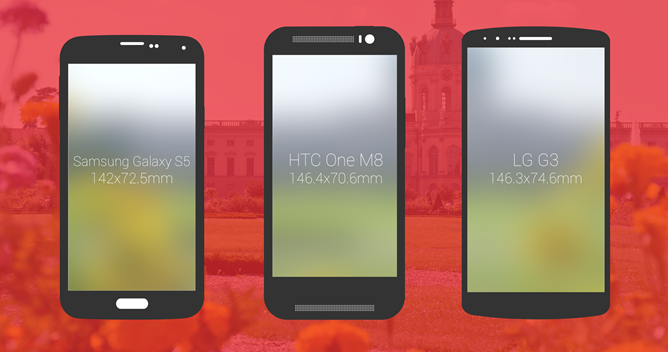 Mockup by our own amazing +Liam Spradlin

The first thing you'll notice is that, surprisingly, LG's phone isn't even the tallest among the three. It's actually a tenth of a millimeter shorter than the One M8. That means LG is packing a full half-inch more display panel in the same height that HTC is using. Granted, those BoomSound speakers and that HTC logo take up their fair share of space. Compared to the Galaxy S5, it's about 4mm taller - certainly not a huge difference. As you can see, LG is also making much more efficient use of space than either competing device, as the display absolutely dominates the G3's substantial façade.

The one place where the G3 does get a bit portly is around the sides - it's nearly 2mm wider than the Galaxy S5, and a full 4mm wider than the One M8. That's still a solid 5mm narrower than Samsung's Galaxy Note 3, but it almost definitely will make the G3 a bit more of a handful than its competitors. For comparison, the OnePlus One, which also has a 5.5" display, is a full 6.3mm taller and 1.3mm wider than the G3. Go back to 2012 and the Note 2, which had a 5.5" panel, was 4.8mm taller and 5.9mm wider than the G3 will be. That definitely does go to show that LG is making use of every millimeter it can on this phone, if the relative surface area of the display vs. bezel on the mockup doesn't clue you in to that already.

I do agree that the G3 is still quite big, and while some of us may bemoan the seemingly ever-increasing size of smartphones (I know I do occasionally, too), I do think OEMs should be trying to squeeze the biggest screen they can into the smallest frame regardless. And it looks like the G3 may have done the best job of it yet.

PSA: eBay Hacked Two Months Ago On A Large Scale, All Users Need To Change Passwords