Google has bought Divide, a startup that secures smartphones to make them enterprise-friendly. It uses containers, a concept that should not sound unfamiliar around these parts thanks to the likes of Samsung KNOX. The approach separates a user's personal data from work-related files, effectively isolating them from one another on the same device. Google's purchase could imply a desire to tighten up Android's security out of the box and better attract the interest of enterprise customers. 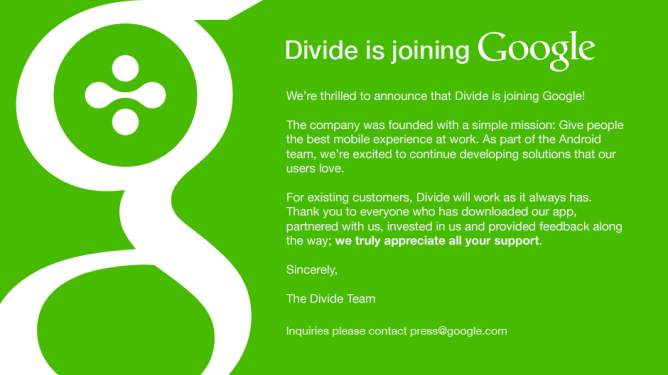 Divide, formerly known as Enterproid, was backed by Google Ventures (along with other investors such as Comcast Ventures and Qualcomm Ventures), so it doesn't come as too much of surprise that the team was on the tech giant's radar. Still, certain businesses have held off on using Android due to security concerns, and this acquisition suggests that Google is not ready to cede the workplace to its competitors lying down. It could use Divide's experience to make Android more corporate-ready without needing outside vendors to come in and introduce their own bits.

Android may be a more open operating system than the likes of iOS, Windows Phone, or BlackBerry OS - but dear corporations, that's nothing a good container can't address, and Google's may soon be ready to give you one.

Update: This news lines up well with previous reports that in the next major version of Android, the "L" release, Google will make a strong push for corporate adoption. Other rumored security features include partial wipe, password storage on chips, and better data encryption.

Sprint Adds New Total Equipment Protection Plus With More Things You Don't Need For An Extra $2 ...