If you've got an HTC One on T-Mobile, whether it's the original from 2013 or the new One M8, you have a software update headed your way. Nether is packing a new version on Android, because they're both running KitKat, but new features are inside nonetheless. One M7 owners get a refreshed version of HTC's Sense interface, and One M8 owners now have access to the Extreme Power Saving mode.

Sense 6 is the version of the HTC interface that debuted on the One M8, and since it's being passed down to the M7, we can assume that it will make it to the devices like the One Mini and One Max at some point. Changes are mostly cosmetic, with icons that are flattened and menus that are streamlined compared to 5.5. HTC's BlinkFeed, a Flipboard-style app that's given pride of place on the homescreen, is a bit cleaner thanks to the loss of an unnecessary weather widget, and it can be removed like any of the other homescreens on the Sense launcher. The One M7 update is software version 4.19.531.10, and it's a whopping 695MB. 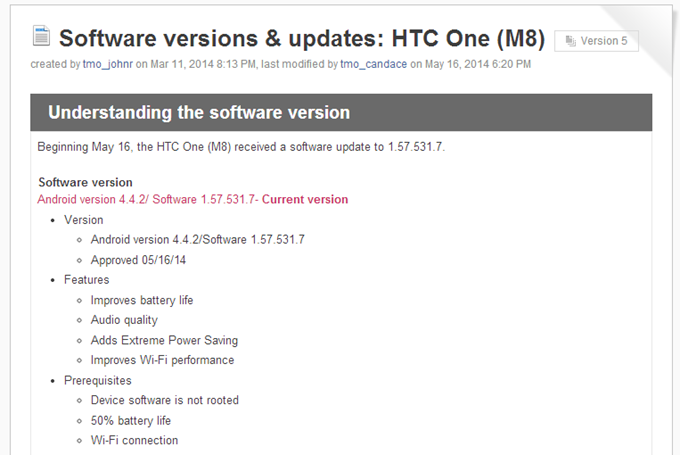 The One M8 now has access to the extreme Power Saving mode first seen on the unlocked version of the phone. This special locked-down interface grants access to phone calls, text messages, email, calendar, and the calculator, and nothing else. Utility in this mode is basically crippled, but it should let the M8 last for hours and hours on even a sliver of battery. According to T-Mobile's support page, the update also includes general battery improvements and better audio and Wi-Fi performance. The update is software version 1.57.531.7.

The OTA is probably going out in stages, so don't be surprised if it hasn't reached you yet. As usual, those who have rooted their phones or installed a custom recovery will fail the standard unlock process - check your favorite Android forum for model-specific instructions or custom files.

Evleaks: Android Silver Is Coming In February 2015... And Don't Expect A Nexus 6 [Update]